HALLOWEEN HASH!
It's time for the scariest, spookiest run of the year! Dress up in ur freakiest outfit (hmmm maybe some of u might only need to wear the uniform...)
Hares: Complete Flop, Bunghole, SpawnStar, RingSting
Where: the Birdcage, 34 Lorikeet Drive (corner of Kestral, white picket fence)
Time: get here early for a face painting extravaganza! Otherwise the usual 546 ish
Bring: torches, trick or treat
Doggies: only if they're a werewolf
Nosh: with RingSting in the kitchen, you should be scared!
OnOn Black cats
Posted by faucet at 7:24 AM No comments:

Hare: DIY & NN Belinda (& Half Tit via phone conference)
Where: Demco beach carpark (access near bend in Clementson St.)
Time: 5:45 for 6pm-ish kick off
Bring: Torches
Dogs: are welcome
nosh: for both vego and meat eaters
Posted by faucet at 6:54 AM No comments:


Next hash run: 13 October
Hare octopussy
Address 7a Stainton place cable beach
Torches etc, food for both kinds
Please bring some extra cash and your sugar cravings as I will be selling cupcakes for the McGrath foundation, $2 each

P.s
Please put your drink bottles in refuse bin/box provided and don't leave them lying around for somebody else to clear up your mess. Quickie very kindly cleared up your mess after Faucet's run, where there were drink bottles everywhere. I have to say I'm really disappointed in that type of behaviour, have a bit of respect and courtesy at other peoples homes.  Sermon over and out Barge.
Posted by faucet at 9:14 AM No comments: 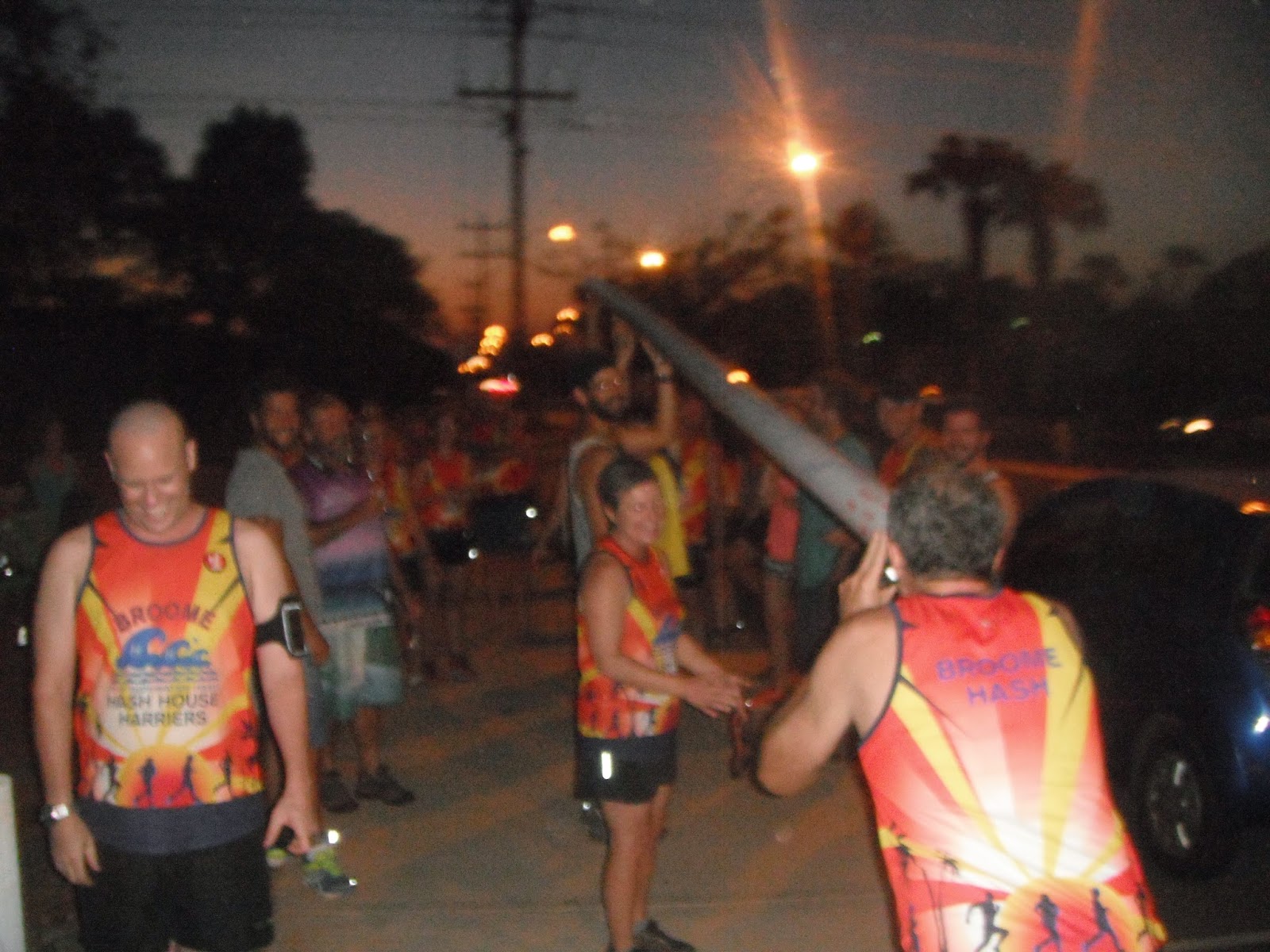 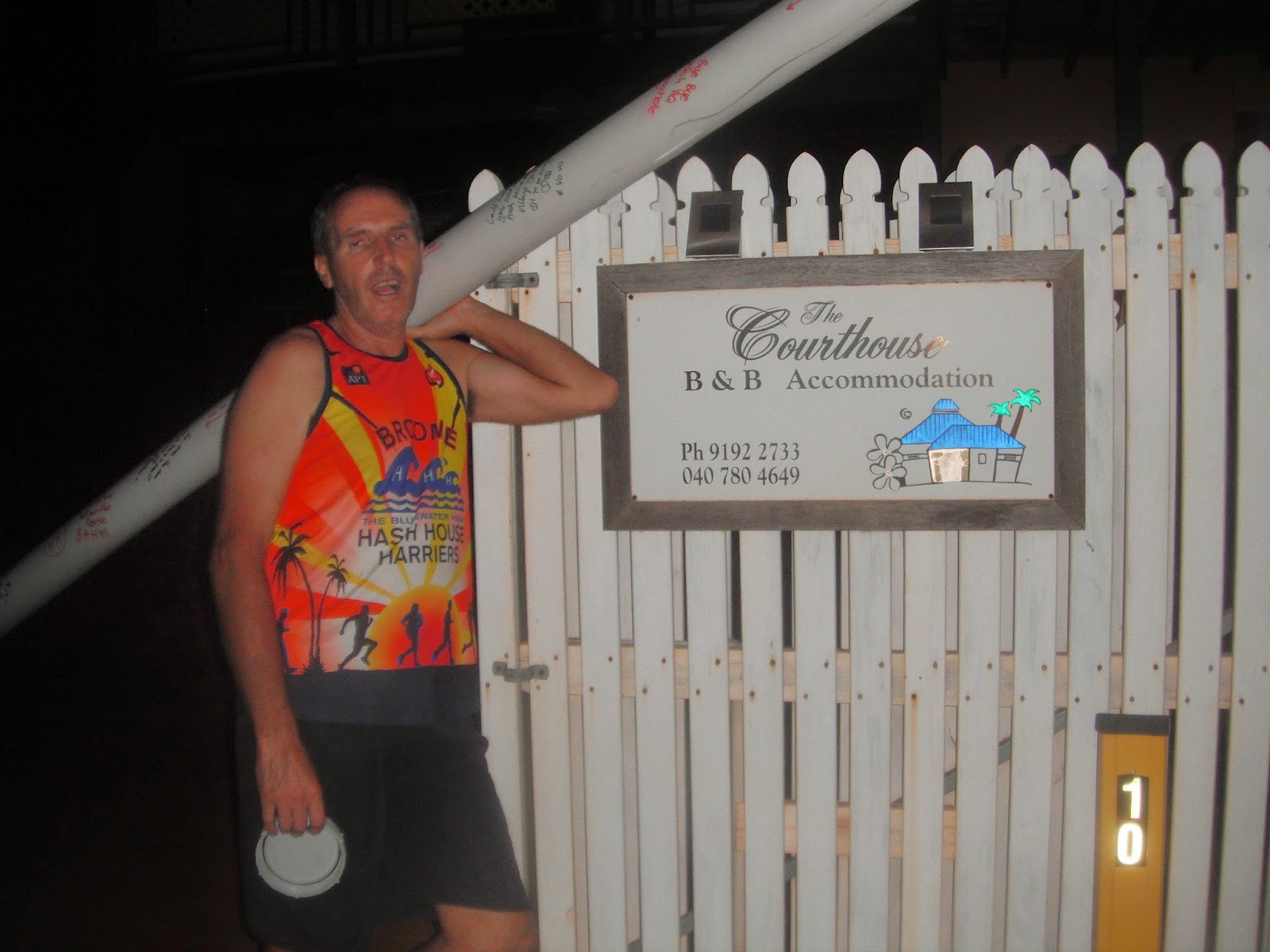 In true form, Faucet was almost late to his own last B&B run, marking 'on home' on Frederick Street at 5.30pm. Shame he wasn't 10 min later, he would have seen hashers congregating on the Frederick St side of the courthouse.

In our hard to miss, better than Derby shirts and with an open esky, around 20 hashers blocked the busy footpath, scribbling madly on 6m of plastic goodluck piping and lamenting the impending loss of the hash clubhouse. Someone asked what ‘VO-VO’ meant.

Meanwhile, at the soon to be ex clubhouse, spirits were low. Several virgins showed up at the B&B in tremulous anticipation of their first ever hash run. Faucet welcomed them warmly; reassuring the virgins that his ‘friends’ would arrive soon. He had 20 of them, “yes, yes, I know 20 is a lot, but I have 20 friends who will be here soon”. As time ticked on, Faucet started to worry. He told NN daughter Tara to reduce nosh catering and cried a little into the taco mix. Then, stoically bracing himself, he headed back out to the virgins and spent ten long minutes elaborately explaining what a hash trail was. 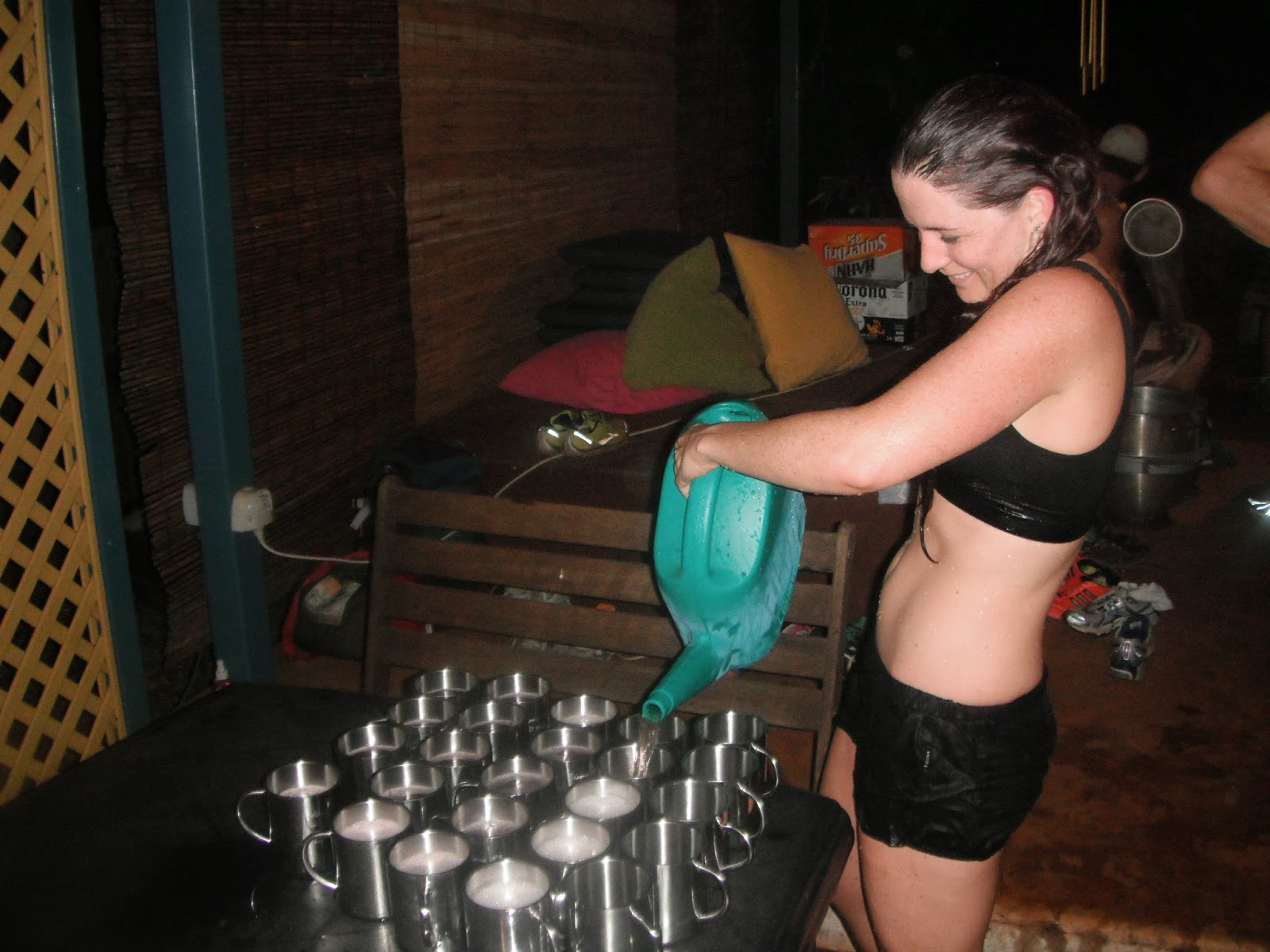 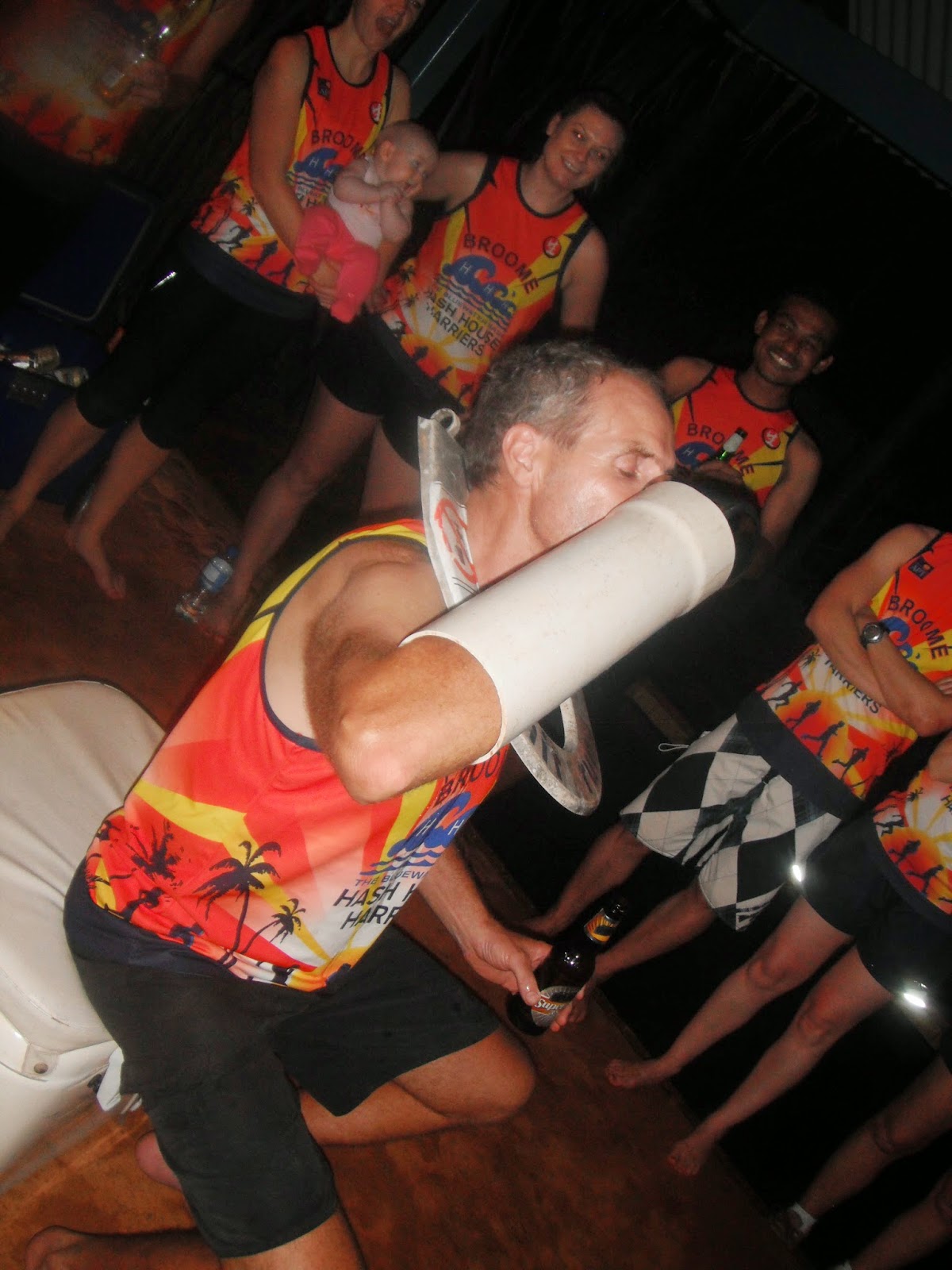 In what one can only presume was a confused start, Faucet and virgins ran with mixed emotions into the street. Right into Stewart, left into Hamersley and up to the cnr of Frederick, where Faucet looked left and saw 20 of his nearest and dearest; although possibly not at that moment. The hash crowd went wild, Faucet started walking slowly towards the group, the virgins clapped and cheered, no doubt relieved they wouldn’t be facing the hash trail alone. Faucet was yet to crack a smile. The 6m goodluck pipe was ceremoniously handed over, and beers and non-identifiable liquids were poured down the probably used pipe into Faucet’s open mouth. He still hadn’t smiled convincingly.

Setting off towards the bay, 6m of goodluck piping on his shoulder, Faucet became a liability to himself, other hashers, pedestrians and vehicles. The 2 dot flour run was short, or long if you wanted, taking in drains and the closer surrounds of the soon to be ex hash clubhouse. Somewhere along the way, two virgins and a dog disappeared, presumed to have taken the long option. 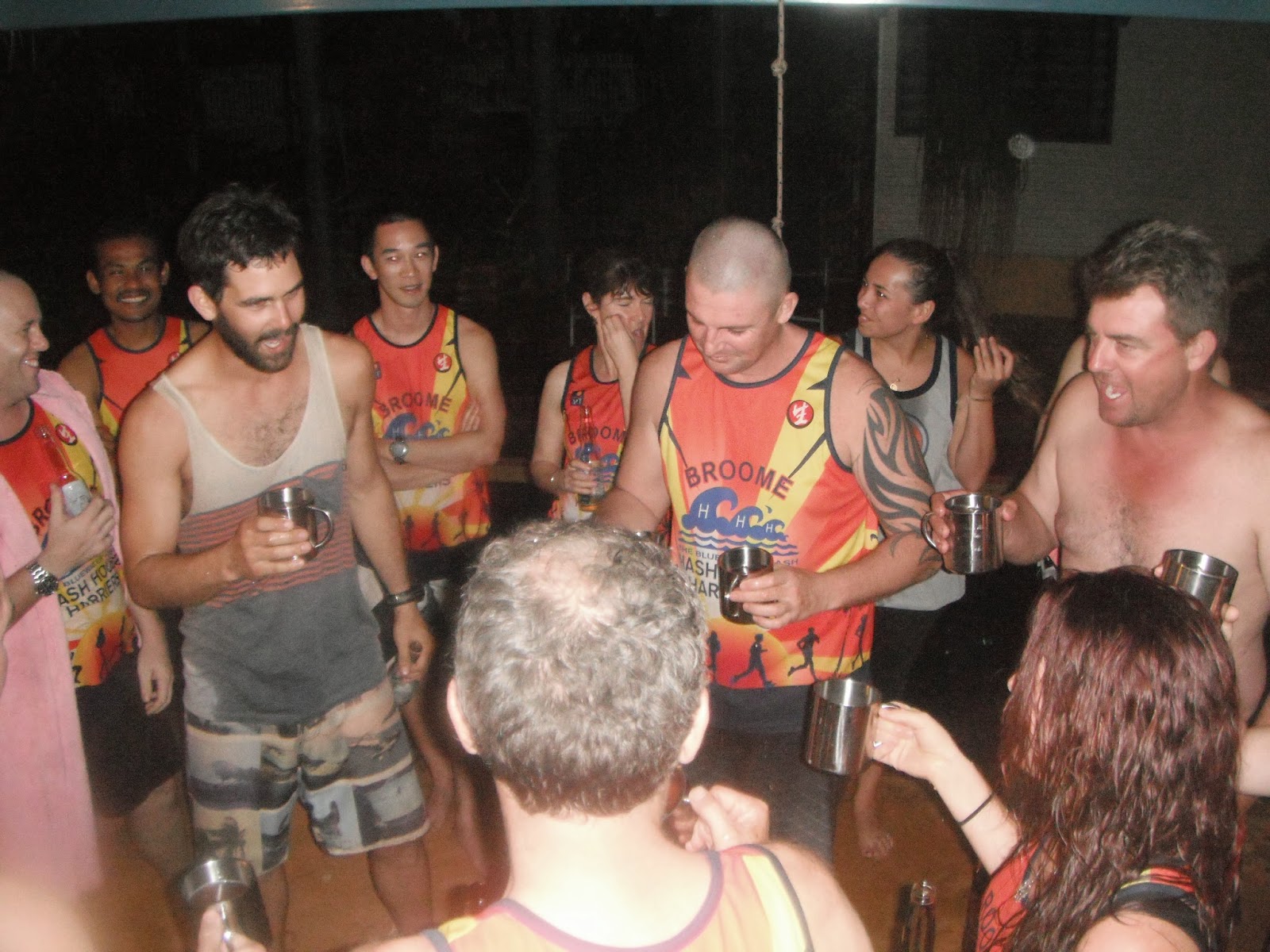 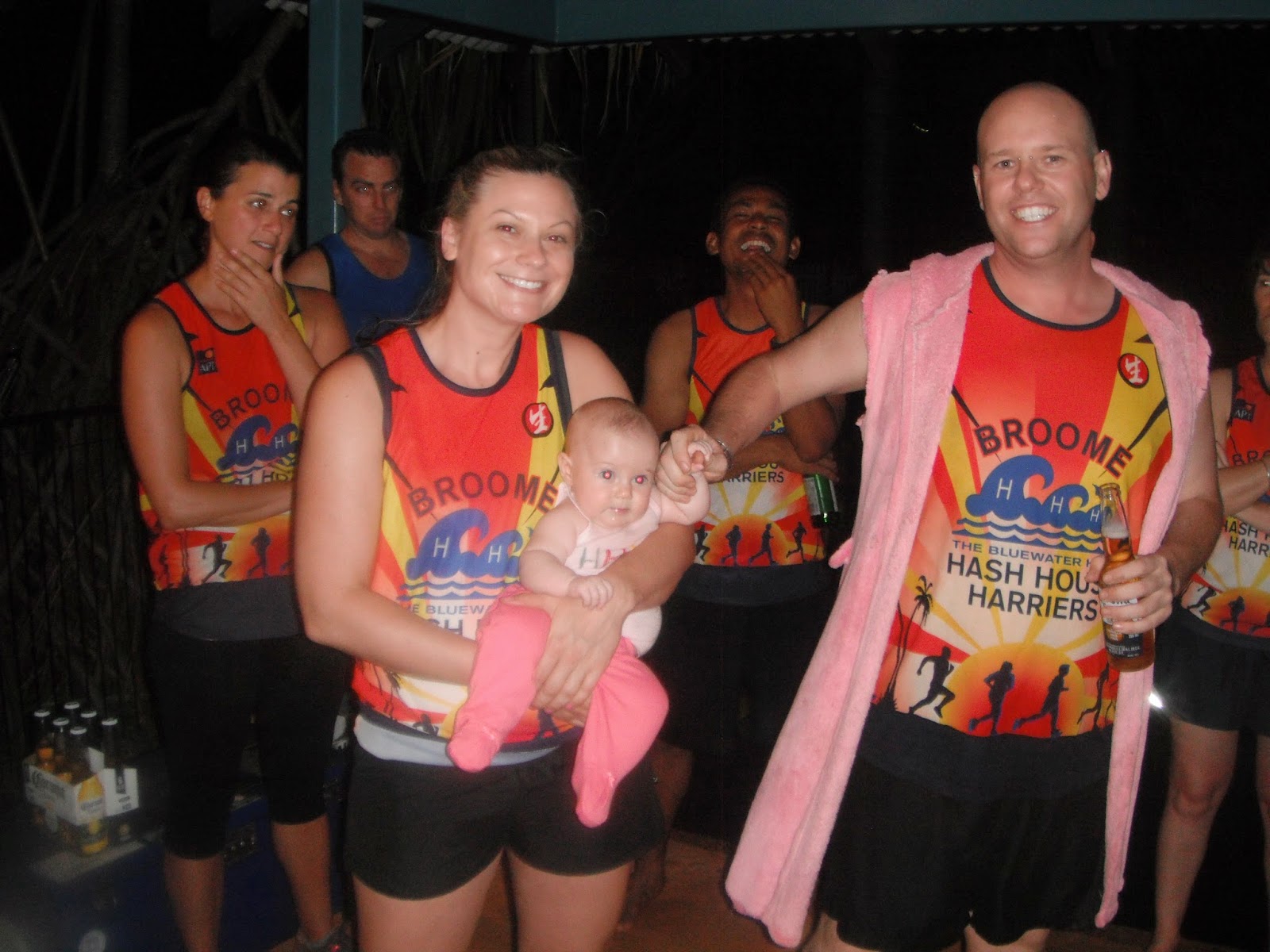 Back at the almost ex hash clubhouse, Faucet quickly sent NN daughter Tara for more food (Chicken Treat chicken and chips). RA – happily renamed the more auspicious moniker of CrocDiver – along with Slocum led with song number 7 and Faucet started to smile. The two lost virgins and dog stumbled bewilderedly back into the clubhouse grounds. RA gathered the virgins and invited Faucet to continue his one man educational show of all things hash. Faucet popped and grinded (ground?), only to bump hips with the inert. After another quick lesson, the virgins started to dance. Then the dog bit Faucet. German virgin owner made a possible apology. Unfortunately, it couldn’t be translated in time for this blog.

Hashers spent some time reminiscing about the hash clubhouse and shed a tear for its impending loss. Faucet assured all that his new clubhouse will be bigger and better, with a deck, sauna, spa, gym, pool, kegs and enough beds for up to 20 hashers to stay the night. In fact, he exclaimed, 20 hashers could live with him forever! For free! 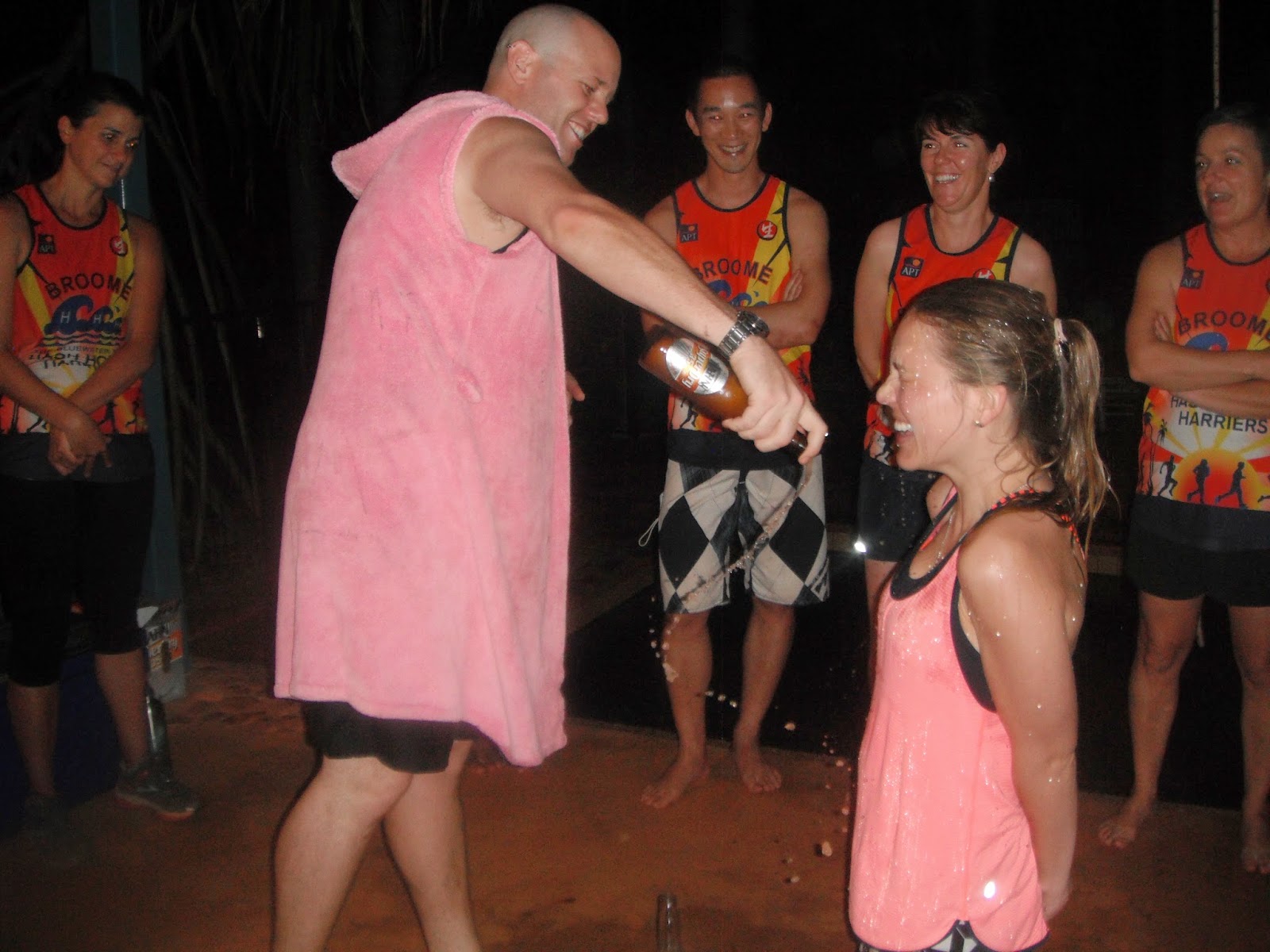 Charges:
Media: Razor (who had already snuck off) and Pirates Slocum and daughter
No uniform: Floppy and someone else ..?
Last minute extreme pranking: TA and Octo
Bunghole – can’t remember why but she was seen using a new watering can beer dispenser earlier
Faucet … a virgin … can’t remember …
Returnees: Bogger, who brought along NN Ken; and even though she appeared last week, because no one wrote the blog, honourable mention to Yamashita Suckerfish
Visitors: possibly there was one. From somewhere else. Not Broome.

There was a kiwi naming: No Teeth On Deck

** Reward offered for return of hash book and cash. Both last seen on Virgin Mary’s person. Reward does not require Mary to be returned with items.

DON’T FORGET: Faucet is having a house un-warming from 4.30pm Friday, 10/10 – another opportunity to sabotage the hash clubhouse pre-handover.

Posted by faucet at 9:13 PM No comments:


Hare: Faucet
Venue: 10 Stewart St
Reason: last run from "The Courthouse"
Start: 6.00pm as I'm possibly already there
Food: of course
Torch: I'm thinking it would be a good idea.
Towel: if you want a dip
Posted by faucet at 6:38 AM No comments:


Song number 7
I mean broome hash #404
Date: 29/9/14
Hare: Virgin Mary, Off Tap, Crab Shit
Where: Broome visitors centre carpark
Time: 5:45 for 6pm-ish kick off
Bring: TORCHES! TIGHT FITTING SHOES! Portable shower, towel, strollers and a wheelchair
Dogs: are welcome
nosh: for both vego and meateaters
ON ON!!!!
VM
Posted by faucet at 6:37 AM No comments: