Hasharama!!!
the time has come to celebrate Faucet's 200th Run and we'll be styling it up dressed as Faucet's favourite alter ego FAUCINE!!!
So wear your best Faucine impersonator gear (for those of you who haven't seen him/her in all it's glory, think party frock, luscious wig, pearls etc!) and let's show Faucet how proud we all are of him for making it to 200 runs!!!
The Faucet Extravaganza will depart from Pelcan Gardens (park cnr Mary and Herbert Sts Broome - just behind the hospital).
Hares: Grunter , Guzzleguts and Uranus will attempt to make up for the 15km disaster that was last weeks run.
time - yes 5:45 for 6pm
food - yes
torches - yes
something to swim in
etc
On on (x200!!)
Inseminator :)
Just a question here. Does "bring something to swim in" mean bring your own pool  and also do we wear a bikini or boardies?
Posted by faucet at 9:25 AM No comments: 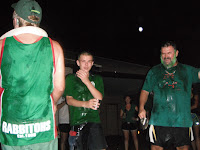 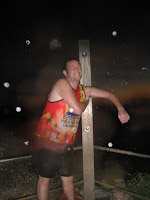 Long run. Short Blog. Seems like Technicolour Yawn, Slowcum and Slurge all set a run each in some part of town and then they just connected them all together. There was a Hash Halt somewhere near Coconut Well but a few of us opted to give it a miss and short cutted home but still did over 7 K’s. Even the walkers got a workout as it was such a cool evening, low thirties, high humidity and no breeze at all. Gotta love Broome in the wet. The RA pool 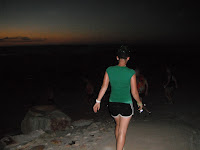 was low so Faucet did the job. The hares were congratulated on their great run and downed a beer which was actually orange 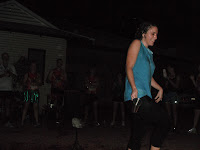 coloured. Not sure what Back Page was putting in them. Speaking of colour, everyone was dressed in Green or was sprayed green to 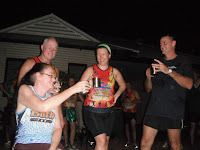 celebrate St.Paddys Day. It doesn’t really show in the photos because after the run everyone was just sweat coloured.  There was some 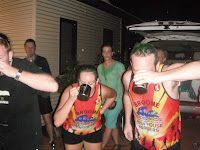 media down downs and a few charges for crap I can never remember and a notable returnee, Perky and a sole virgin who managed to do well for the crowd. 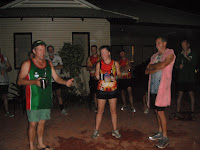 And of course St Patrick was there but fell asleep on the run as it was too slow and short for him. Gurge and Booberator had the food under control with Guinness Beef pies and boiled potatoes. We’ll have to check she’s not here tonight but this was another of Booberators last runs in Broome so it looks like its back to shit food to match the shit runs again. On On
Posted by faucet at 9:22 AM No comments:

Top 'o the afternoon to you Hashers!!!

Where: 2/13 Bandicoot Loop (please park outside on road verge) 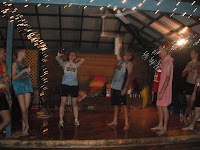 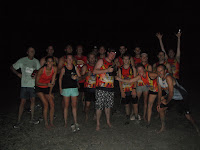 Funny how you mention Boobs and 43 people rock up. I would assume it was for the awesome run but as no-one except me and Boobs knew that then I’ll guess it was for her food. So big turnout which was nice as pre run Monette Saraza turned up with her son Matt to thank us all for the money we donated from our Red Dress Run a few 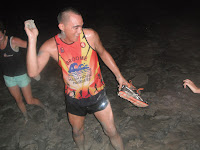 weeks ago. It was a very touching thankyou and made us all feel proud 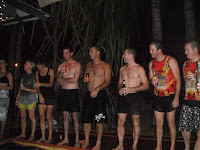 that we run around in silly dresses and drink beer for such a worthy purpose. It was also very humbling but as this blog isn’t about nice stuff I’ll have to move on. What an awesome shit run. People literally 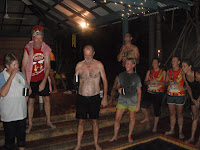 got covered in shit and then jumped in my pool and it looked like shit next morning. Happy to say it 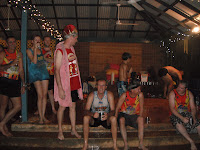 pristine again now. The run did a loop up to the boulevard and then back to the pearl luggers and along the beach following the eco friendly red frog bamboo skewer markers 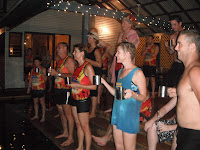 until it made a left turn into the mangroves via a series of little signs. It almost went astray but fortunately on this occasion Dirty Sanchez 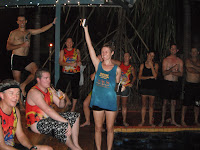 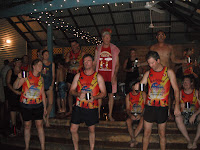 Flats. Wankers! It wasn’t, it was out on Buccaneer Rock. About 20 people made the slog out to the island in Roebuck Bay including at least one or two Virgins and a 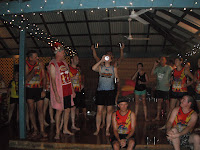 couple of newbies. Nothing like a cask of port and a few choruses of “my garden shed” in the dwindling light at low tide on an island in the 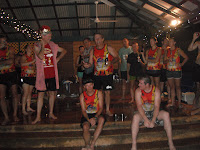 Kimberley wet season. On the way back Superturd, the bastard not only started a bit of mudslinging on the flats but then washed his feet in the clean water Faucet had organised Bubbles to deliver to the “on home” and then kicked the buckets over and ran home.
Big circle around the pool with Cockup running the show. Grownups are so much harder than kids to keep under control. There were charges for all sorts of crap, an improvised ice chair for Guzzleguts who’d just had a baby (even though it looked like he was still carrying it) and another for Uranus. I don’t know why or care about why Uranus was on ice but I would care about myanus being on ice for the amount of time those guys sat there. 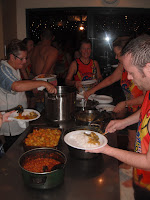 I think you need to click on the photo with Quickie holding her arm up and have a look at the expression on Uranus’s face. Hmmm). We had a couple of visitors and a couple of old hashers joining us as well as several returnees. Cockup moved things along as he does (and what’s he doing in that photo?). We had three virgins who he introduced into the Broome Hash family and told them how Broome Hashers love each other and then reiterated by stating it again with the word “really” added and I’m sure I saw some smirks and flushing in the crowd. The faces changed again as Slowcum pulled a joke out of somewhere! Despite a few trips into the pool Booberator fed the masses with yummy food and everyone left full and happy. I think that’s how it all went. On On.
Posted by faucet at 11:52 AM No comments:

Hares: Faucet & Booberator (Boob's last Broome Hash for a while so she's cooking up a Big Booberator Storm - you know that means an amazing feast!!!)
Details: "10 Stewart St. Everything else the same plus a pool"

(To remind those of you who haven't been for too long, that means a 5:45 for 6pm start on Monday nights!!) 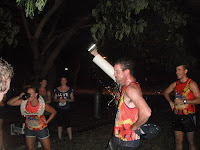 Hippy Shagger and, well, I guess 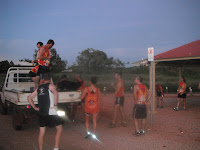 I could call her hippy because it works and I can’t remember her name but anyway they set a shit run. Yama set off at a blistering pace and was picking all the checks until she lost it somewhere up on Guy street and then we all ended up at the Yamashitta Suckerfish Stolen Bike Memorial Shelter down on Demco Beach. It was almost another of those “where the fuck is the beer” hash holts that seem to be pretty popular lately but they arrived just in time. Slangs Bitch and Faucet thought the on home would be short and so enjoyed the last of their halt beers before setting off, only to find the run kept going for much longer. Still everyone made it back safely to town beach. We make use of Cockup 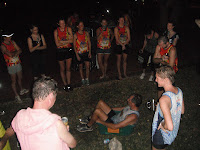 when he’s in town and so he RA’d the 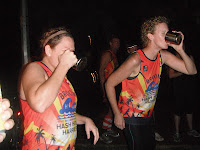 circle. The hares took their’s well with a nice action shot of the pipe doing its job (click on photo to enlarge). Faucet, Camel Toe and Herpes all got charged as returnees; half the circle had to do a down down for being in the paper last week (hash red dress run article) and then for some reason Camel Toe ended up in a tub of ice water (better click on this one too). This photo was not digitally enhanced in any way. Later Faucet ended up in 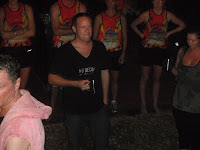 the tub as well as he told stories of 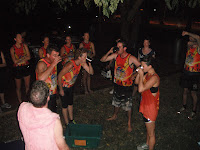 hash from other lands. There were a few other random charges and just before the circle closed Crackdiver turned up dressed pretty and Bubbles sneaked in and hid behind the ute until the circle closed. There was so much food but it some how managed to disappear. Maybe it was nice. Nah, it was shit like the run. On On. 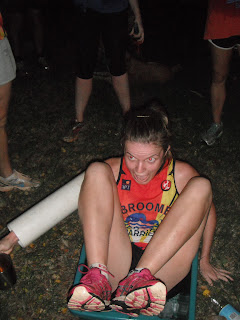 Posted by faucet at 7:36 AM No comments:

In the short sweet words of this week's Hare Hippie Shagger...

"Town beach normal time. Do you need anything else?"

(so after asking a few more questions I found out it's actually in the carpark near the BBQs, I'm guessing there'll be HashNosh!)