Most hashers joke about their drinking club with a running problem but I think a few people at Broome hash also have a dress up problem. The Xmas eve run showed just how silly they look, standing out in the crowd dressed differently to everybody else. 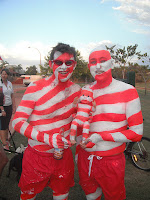 It’s happening more often these days and you’d think people would start to pick up on it. Now obviously Tightarse, Superturd, Hippyshagger and Cockinafrock should be role models for all you people who have dress up problems and come in standard hash attire. Nothing weird about those boys. Okay so the strange elf was a bit scary and Jesus was flashing a bit too much (but not much by normal CIAF standards) but the other couple with the kid they were fine. I mean, we just blended in as we ran around town perusing the xmas lights. The fact it was daylight for most of the run didn’t damper anyones spirits and gave passer bys a better look at their fellow citizens 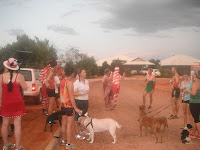 . There were several horn blasts of approval from passing motorists who secretly longed to be dressed up and running instead of sitting in the comfort of their air-conditioned cars or possibly just wanted us to get off the road. As dusk set in and the sangrian halt finished the pretty lights started to shine and the pretty costumes started to wilt, the mob dispersed to follow the last of their sweat soaked clues back to the circle in Sunset via the last remaining Xmas lights, unless like Backpage, you’d driven to the halt. The circle seemed small with only 20 runners but huge in comparison to previous Xmas runs. Faucet was default RA due to Cock being the hare for the night. We had a few returnees with Crackdiver, Booberator, Conchie and to a lesser extent, Cracka all back from wherever it was they have been. Slops ,Yama and Cock got charged for something and virgins were as common as…virgins. 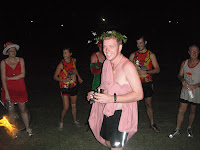 Hey what is that fire thing on Boobs foot while Jesus was in the circle??? Anyway the circle was short, 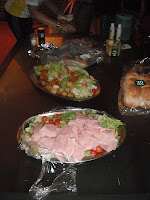 sweet and doggie. Actually where is doggie he must be due back soon? The food for some reason was across the street via Cracka? Cock had organised Xmas fare with lots of ham and a few cold roast vegies and salad stuff and bread rolls and Faucets daughters’ rum balls. All that was missing was the snow but we all knew that wasn’t going to happen. On On.