On on
Inseminator via Barge
Posted by faucet at 12:21 PM No comments: 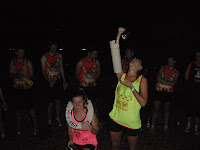 So perhaps this week’s blog should be short and sweet shit like the run. 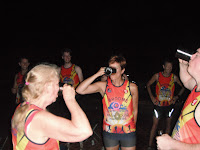 We ran around Cable Beach, Januburu and Minyirr Park without getting too lost. The herpes mark was a little weird but I guess that’s what happens when you let Herpes and Cameltoe set the run. Only got caught on one longish on back but that was in the sand. The walkers were a tad slow and got back about a beer later than the runners.Cock was RA and had to drag Cameltoe from the kitchen to get a hare down down. The photo of the hare 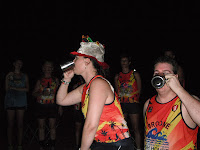 girls looks a bit evil but then maybe they are? We seemed to have a few multiple offenders in the circle with Fanta Pants in for being away and then again for getting married, suddenly, while she was away. Fancy not inviting Hash to your wedding! Stationary Crab was back from New Zealand where we also didn’t get an invite to and Guzzle Guts was back from who knows where. He was also dragged in for having a significant birthday and Octopussy got to share the 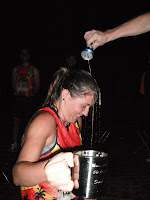 birthday song on his knee. There were a few media charges, Rice bubbles was in there for something as were Quickie and Uranus. We had a naming. Someone put it in the comments sections please. Jiggly Titts got away without a charge for blatant political advertising and Faucets mo is getting worse. Quickie was a bit crabby and the food was bountiful and edible. Can’t ask 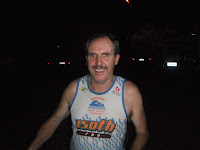 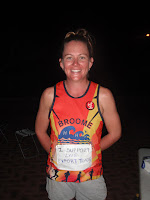 Details for hash:
Hares: herpes and camel toe
Where: 29 Hay Road
Time: the usual
Nosh: biggest mob of feed will be provided including some for vegos
Theme: no theme but 2012 is the year of the farmer so give a shout out to all the fellas wearing flannos blue chesty and starring a beer gut- they put food on ya table and beer in ya stubbie/ can/ flaggon
On on
Inseminator :) 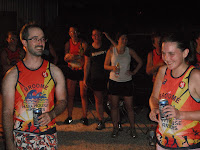 friends. They came from far and wide; some came from as far away as Cable Beach and the Heavy Industrial Area. When they arrived at Canetoad and Booboo’s house they found they had drawn pretty pictures on the stepping stones with chalk and then told everyone a story about the mysterious lines. Booboo made a funny joke about some of the lines looking like testicles but only the naughty people laughed. He told everyone how he and Canetoad had drawn them all over town and how we had to run and find them. It was really exciting. Everyone was bursting to go but Booboo hadn’t quite finished. He nearly forgot to tell everyone about the flour and the blue tape. That was a booboo.  So, just as the sun was just about to set in half an hour or 35 minutes, everyone ran off. Some people were really fast. They have really long legs and 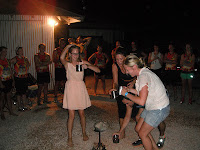 short penises so they can get to the checks really quickly but this time there was a little surprise. Silly Canetoad and Booboo had drawn the checks on the road and those big motor car tyres had rubbed them out. Luckily, as fate would have it, some of the clever hashers were able to find the trail and they called to their friends “On On” and they all made to the Hash Holt. Well, not everyone made it to the Hash Holt, Booboo forgot to go there. We all know what that means when the hare doesn’t turn up at the Hash Holt don’t we! This is the sad part of the story so if you get upset easy then cover your eyes for the next few lines. Okay, do it now! There was 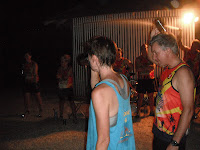 NO BEER at the Hash Holt. Every one was sad and confused and wandered around in circles until wise old Cockup suggested we could all sing a song and that would make everyone feel better. Everyone gathered under the ‘Yammashiita Suckerfish Stolen Bike Memorial Pavilion” on the foreshore of Demco Estate and sung three versus of “My Garden Shed”. Well not only did that make everybody happy again but it also made the beer arrive. It is a very magic song.

The sun was now saying good night and the little stars began to flicker and everyone turned on their torches which they bring with them every week so they could run along the dangerous rocks up towards Town Beach. Everyone made it safely back to the streets of Old Broome where they followed the magical path all the way back to Canetoad and Booboo’s house. This is a long story isn’t it? Maybe you need a rest or should be working and need to finish it later unless you are too excited to know what happened next. You are excited aren’t you? So back at the house King Cockinafrock gathered everyone in to a circle, well not a 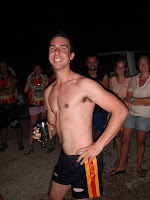 real circle more of misshapen ellipses. They’re big words aren’t they?  It just means that the coordinates of the shape form the basis for several sets of three-dimensional orthogonal coordinates. The elliptic cylindrical coordinates are produced by projecting in the z-direction and prolate spheroidal coordinates are 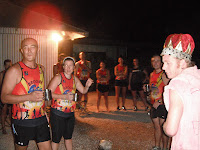 produced by rotating the elliptic coordinates about the x-axis, i.e., the axis connecting the foci, whereas the oblate spheroidal coordinates are produced by rotating the elliptic coordinates about the y-axis, i.e., the axis separating the foci. That’s probably not that important to remember so we’ll just call it a circle. We all know that one. Everybody loves the circle as we sing songs to our friends and use words that our mummies and daddies don’t think we ever use. Booboo and Canetoad went first and we sang about how they tried to go to heaven but went the other way. That reminds me of the new story I was reading today about the Royal Commission in the Church and Paedophilia but we’ll keep that one for when you get older. The next song was for Quickie 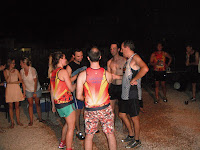 and Uranus because they had been on a holiday from Hash. We probably sang them the wanker song which is really silly as Quickie doesn’t have a penis even though she is a fast runner. We also had a virgin runner and 3 other virgins who didn’t run. We don’t ask too many questions at hash. They danced around the Inca Stone which is also a story we could talk about one day if the circle is too boring. Next they bought out Faucet 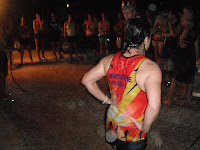 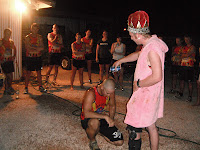 week. Everyone sung the pies chips and gravy song for them. That’s the song where you get to say the naughty word twice. I don’t know about you but I’m getting sleepy now. There were songs for Superturd and Cockup and Perky and Butterbitch. If you break his name in half then the second bit is a swear word. The circle story is almost over except for Barge who 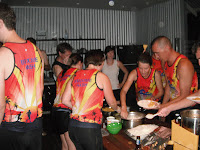 not only had a down down but was also severely enforced with the hose and Dirty Sanchez got a big box of black party balloons from Derby Hash. That would probably make a great story! I almost forgot that King Cockinafrock gave a hasher a name as he has not had one for so long and he was getting sad. He is now called Porker because of what he likes to do on weekends. After the circle there was yummy food and everyone talked and laughed and drank beer and went home except of course for Booboo and Canetoad because they were already there! 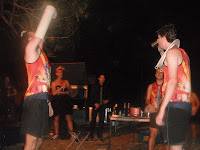 Well don’t the doctors know how 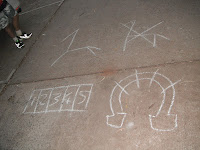 to pull the ladies on Melbourne Cup Eve? They really dragged in the honeys for what was an epic example of equinien excrement. And a few of the boys prettied up too. Not sure where to put lycra boy. For the cheering crowds spread across old Broome and Demco it must have looked like a bunch of 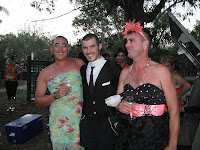 hashers chasing guys in suits who were chasing extra tall thai lady boys. God knows what the patrons of Matsos thought as several of the front 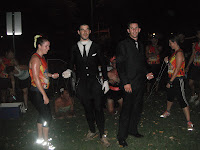 runners gigged their best horse impressions around in a circle outside the front gate.  Think I also noticed a few whips, ties and fascinators along the way. The on’s were creative with little horsey type arrows and stalls for checks. Horseshoey things for fishhooks. There was an innovative childish game at town beach where people were 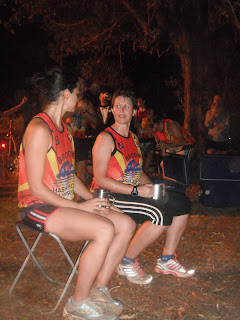 volunteered, chosen or forced onto dodgy looking sleds to be dragged round on the grass by the said weirdly dressed people. Despite the entertaining aspect of the event it did have one tragedy with the esky being discovered to be lacking in beer and punters forced to drink cider or even soft drinks and water. Virgin 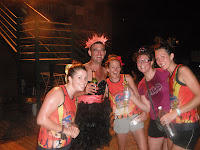 hares usually get one chance! The post race party was run by Butterbitch who moved things along quickly. The hares went first with Arsediver wearing the seat and Roofie showing everyone how to drink while wearing the pipe. Tightarse got a charge for boatsinking, I think there were a couple of returnees, a couple of virgins who creatively danced with the pretty girls but the big one for the night was two of the more beautiful girls, (even more beautiful than Tightarse and Superturd) who reached significant milestones in their hash lives. Sort of sad 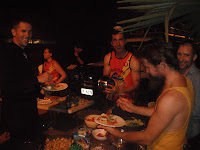 really. Crackafat finally, after all these years made it to fifty runs. And last but not least, Yamashitta Suckerfish made it too one hundred runs. I’m sure she doesn’t even know how she made it that far. It amazing what some people will do to get their name on the Hash Esky. They got off 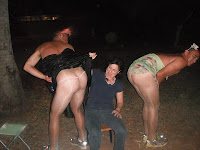 pretty lightly with just ice chairs for a short stint and that was about it. Food was chicken burrito wraps which seemed quite edible. Poor Barge ended the night sadly and probably had nightmares after her inquisitive nature left her with getting more than she bargained for.
Posted by faucet at 6:55 AM No comments:

if you can drag yourselves out for a Monday evening run then get yourselves to:

On on
Inseminator :)
Posted by faucet at 6:22 AM No comments:

it's Hash #305 coming right up on Melbourne Cup Eve so get yourselves tarted up and ready for a good gallop around lovely Broome...
Hares: ArseDiver & Ruffie
Where: 33 Weld St
Wear: Melbourne Cup theme so wear a tie, hat, fascinator/something classy. (Not sure that classy & hashers go together in the same sentence?)
What: Run, Beers, Food (incl vegers)
Giddyup!!
On on :)
Posted by faucet at 9:00 AM No comments: