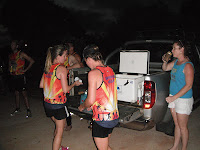 Same shit different side of the street. Who was that girl who stopped Faucet getting to Hash on time and almost ended up feeling ran down? All happened pretty fast. Anyway blog, despite Barge’s little b arrows littering the streets, Octopussy and Pusher managed to be able to set their own shit run without running all the same streets which was pretty 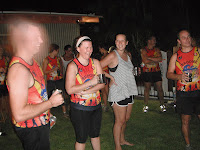 amazing as Barge’s run was so huge I thought there was no clean streets left. There was a hash halt which a few people straggled into as the rest of us had just finished our beers. The on home from there wasn’t too arduous or too difficult for the mob that got lost on the first bit. Did you know the correct answer to “does my arse look fat in this?” is always no! This has nothing to do with anything but it just occurred to me. The circle was run by Warwick Slangs Bitch and a couple of over zealous 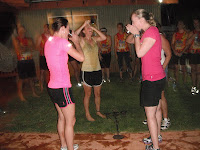 enforcers with ice water. The hares were up first and got what they deserved. Butterbitch and Perky were back from China, Grunter back from popping out a kid and I think it was Cockpit back from, I don’t know. Actually that’s a really weird word when you think of it etymologically. Cockpit. How did that come about? What happens now that girls can fly planes too? Mmmm. We had a few virgins for a change who entertained 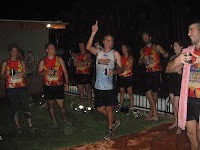 us dancing around the ancient Machu Pichean candelabra and then later I think one of them had to do a down down out of her new shoe. Bit rough on your first time to hash. Enough weirdness goes on anyway. There 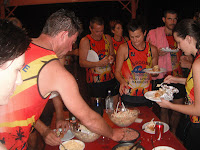 were a few dodgy charges with Fanta Pants, Faucet, Dirty Sanchez, Superturd and Tightarse all up there for something. There was a quick recap of that song from Derby, which will remain nameless and that’s about it really. The food was shit as usual with baked potatoes with shit on them and brown stuff for desert. The toaster is calling my name. OnOn.
Posted by faucet at 8:07 AM