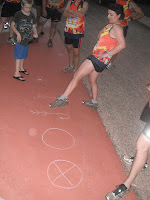 It was the turn of old Bargey and young no name heath to set the run and I’m sure he learned a thing or two. The run was long and arduous and short on chalk. I ended up in the mob that did 8.6km and still ended up shortcutting on 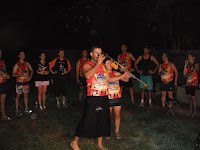 home. I must say though if you wanted to discoverer the myriad of laneways on offer in Cable Beach then this was the run for you. We also had quite a few walkers and the number of people on crutches doubled as Crackdiver joined Cock with a broken toe from the Derby 600th. Don’t ask. Cock ran the circle again and made sure a few stories from the Derby weekend came out, but I know a few that didn’t and here would be a great place to bring them up. But I won’t. Unfortunately this year none of them involved me. 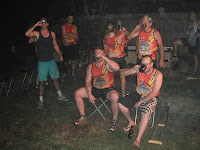 I should do a Derby blog but…. The hares got to take the first down down with NNH in a dress? and Barge drinking from a crutch. Bet she hadn’t done that for a while. We didn’t have any virgins or visitors again but did have a few returnees. There was a great interlude of “my garden 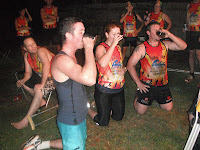 shed” which would have to be the most invasive, stupid, ridiculous song I have stored in my brain. I may need to have it surgically removed. I’m sure I’m not alone and a few of you from the Derby trip are humming it now. Actually it would be a catchy tune for the new Broome Hash Song. Back in the circle Crackdiver got a nice cool seat as did Padam for his weekend antics. He was finally christened Padam along with two others who probably also owe their names to the Derby 600th. Hippy Shagger was pretty aptly named but won’t go there, he did have a great outfit and Bestiality probably regrets telling the circle she loves all animals. We 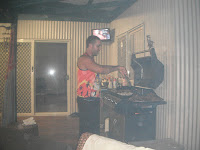 actually have a song about that too and attempted a couple of choruses in true Broome style. 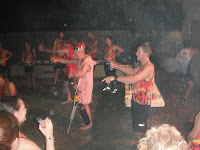 We definitely don’t have any potential competitors for “Australia’s got Talent” amongst our crew. The food was shit as you would expect at the Barge house but it complemented the amenity and the patrons. The toast is calling and I have heaps of shit to do. Turn up next week or you miss out. On on.
Posted by faucet at 8:11 AM