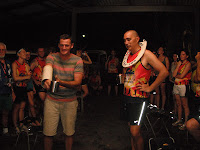 It was Inseminator who suggested that a run set by Superturd and Bubbles sounded like something out of a septic tank. She was right. Shit. At least the quality of the run was consistent with the markings. A fist for an on, a superman logo without the s for a check and a superman logo with the s for an on back and yes, a KXIII for a fishhook. They did keep the pack together though; confusion often does that, as does a hash halt. The wets season is sneaking up so the mid run beers go down pretty easy. The on home was more of an intelligence test with the smart people getting back way 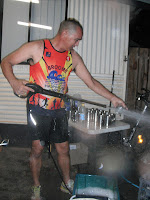 earlier than the tossers who took Sanderling. I was back early as you probably would have already guessed. The cripple guy ran the circle again seeing our charter demands non-discrimination against people who fall over. Actually Cock-up and I think Roofie both fell over on the run but only suffered a dirty leg and a down down. Two of the girls were leaving town. Can’t remember their hash names or even their real names for that matter but they seemed to be getting lots of big hugs from the boys???? They had special chairs and a nice song and Superturd gernied them a little. As he did the hash mugs. Boo boo made one and wore his new shoes and pretty ones they 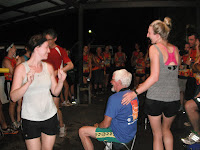 were too. So he drank his down down out of them/it. We had Silver up from down south as he passes through to Derby. Not sure how he got his name as he wouldn’t have had silver hair when he started running back in the 30’s. We had a couple of virgins and danced them around silver on a chair, sort of wanted to write silverchair then but resisted. A couple of returnees with Pusher discreetly sneaking back into the circle. Yama got the dummy again but I guess that’s in 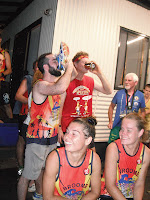 keeping with her choice in men. 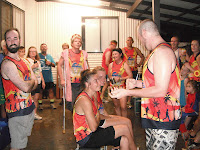 I think it was going to someone else for a change but she stepped in last minute and recued it for the Coghlan street unit. Bubbles thought it was a theme night and came dressed appropriately or maybe he just dressed up for Superturd? Not sure what went on in the kitchen but how the fuck do you burn pasta? Still, he catered well for the masses and I didn’t pick anybody up that night with food poisoning so all’s good. Bubbles also threw in a good joke which went over the heads of most people which is a shame as he'd probably practiced it in front of the mirror the night before. He offered two pots of pasta sauce, one for meat lovers and one for cow lovers. Big mobs off to Derby this weekend. On on
Posted by faucet at 11:10 AM