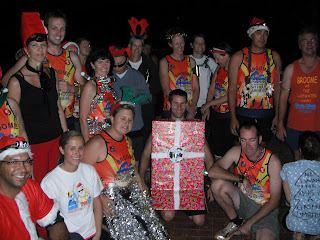 Hash Xmas in July. Slops and Two Dogs went all out for Mondays run, all that was missing was the snow but it was almost cold enough for that as the chilly wind howled off Roebuck Bay on to the eclectic bunch of Santa’s debris huddled up at Town Beach.  Dirty Sanchez came in a box, 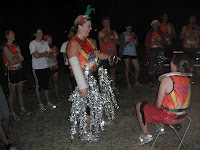 Fanta Pants had a bag on her head, Bogger and Slops had some sort of bondage tinsel thing going on and Barge was snuggled up in Xmas woollens like one of Santa’s helpers. Other people made an effort too but I’m bored with that now 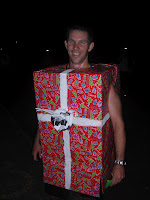 and want to talk about the run. It was shit. If it isn’t bad enough having to run around looking like a dickhead then running into establishments asking for ‘something’ really tops it off. Quickie seemed to have lots of unspent energy to race ahead and collect lots of tickets and won a box of chocies for her effort and in some sort of dodgy nepotistic way young Sanchez also got some as well. Super Turd and Dirty Sanchez also scored a box of chocolates for their dress up skills. The run sort of followed the busy places on the way to Chinatown and then ended up with people wandering around aimlessly in Anne Street 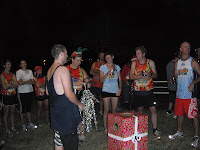 looking for a way to get back to the beer. Irony. Butterbitch was in fine form as usual as he dragged people in and out of the circle and it wasn’t really a night or venue where you wanted to get enforced or wear a beer. Some people did. We had three virgins who were miserable dancers and one couldn’t even pick up her drink properly and had to do it a second time. I worry about the youth of today. Speaking of which, we had a naming with Bubbles young son Rice finally getting officially recognised.  And someone else got named too. A guy with a santa hat. I think I’m losing it. There was other stuff too but I’m hungry now and want to finish and have breakfast. The food was shit or maybe because it was so cold I was expecting a big roast with all the trimmings and ended up getting the Italian version of Xmas dinner from Eagle Boys. I just reread what I wrote and it seems to have a negative theme through it. Next time give me a box of chocolates and I’ll write more positively. On On. 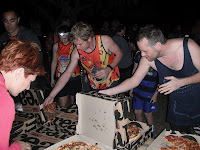