Run is from 22 Sayonara Rd Sunset 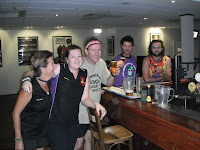 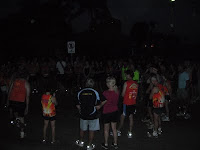 Sixty two people, that would be a record I reckon. That included the 2 six packs of Derby runners bussed over to share the Shinju or was it just the free Matsos Beer that lured them? Cock in a Frock was the hare and did a shit job of it. Poor Quickie is obviously the only one who reads the website or emails with the location and turned up at Matsos. On reflection and inspection I noticed that the actual location of the run wasn’t written anywhere. How did people know where to go? The marks on the trail were good and kept the pack together. Somewhere along the run Faucet slipped home for a quick change and appeared in a Derby shirt which worked out well when Derby Dags suggested we pop into the Roey for a mid run drink. Celine was the only other Broomie who was lured to the bar while the others ran around Chinatown. The Circle was huge. AT quickly slipped into the green dress and took control of proceedings. We had about 10 virgins who either thought it was great and will be back or are probably still shaking their heads at what went on and have written a mental note never to go to Derby. The Derby hashers don’t need much of an opening to drop their pants and sit on the ice chair. Can’t even remember why they did it. We had a few returnees 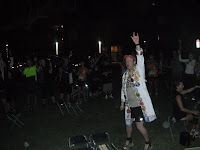 and even Director rocked up for a visit. 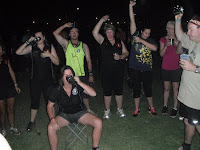 Wombat had us reciting the Hash Prayer, Dags had us doing the Rootchacha Rootchacha song and then Cockup ran us through Swing Low. Great audience participation. We also had a couple of birthdays which was rare as no one usually has a birthday in Broome Hash. As all this was going on Westpac was toiling away over a hot sausage and fed the masses. The keg of Matsos finest only lasted an hour despite discussions amongst the closet brewers on volumes and consumption rates. 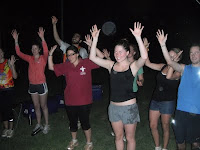 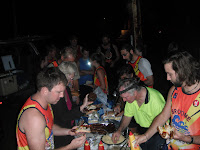 Lane for once again keeping all us healthy runners hydrated and a bit later the gardens of Bedford Park watered and fertilized. Red turned up late in fancy dress with some lame excuse. The Derby Bus headed off into the night, thanks guys for making the effort and the last few Broome hashers seemed to be opening another stubbie as I took off. Should also mention AT’s great work on the trailer over the past week. Thanks to all those involved and great to see we raised $600 for Cock in a Frock to buy drugs to take to Vietnam with his nurse friends at Xmas. On On
Posted by faucet at 8:26 AM No comments:

Join us for a Run around town to celebrate Shinju!

$10.00 for the Run includes a Beverage or two and a barbecue afterwards at Matsos Broome Brewery.

Bring along someone new or get off you socially active/physically inactive enlarged ass!

Thanks to sponsors Matsos.....Broome Hash- Matso's Beer Drinkers with a running problem....
Posted by faucet at 1:54 PM 1 comment: 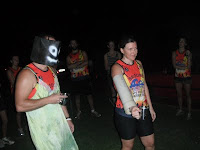 Five point five K’s my arse. I guess that’s what happens when you let a triathlete set the run. Butterbitch and Perky had us running all over Sunset and then ran us down to Roey for another workout. Square checks and arrows with crosses in them but at least there were lots and easy enough to find. 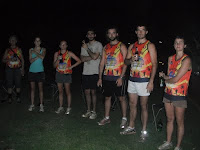 The circle at Sirus and Kapang was in another new park for hash which even had a street light that worked. Butterbitch slipped quickly into the green dress and started RAing before we realised he was also the hare. He tried to begin the circle with a drinking game from the never never but as we were all sober no-one seemed to understand the rules. The photo says it all. We had a couple of new local virgins and a couple of foreign ones dragged along by Westpac and AT. 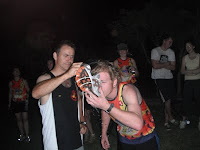 They got into the virgin song and had no trouble downing a beer. Poor old Warricks Slangs Bitch ended up in the circle again but this time for his loss by 4 points in the local footy Grand Final. Guess he would have got one if they won as well. We had a couple of returnees, Red and Tried and a new visitor/new broome hasher called Gobblepork, I think. Might have to ask about that next week. 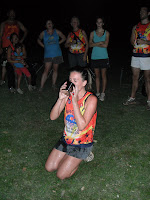 We had Cock in a Frock drink out of his new shoe and he seemed to enjoy it. Pusher and Tackle had a down down for something, I think Pusher because she forgot to bring her kids and not sure about Tackle. The fathers all had one for fathers day and Bogger took a proxy one for Quickie who had her birthday on the doof doof boat and never showed up for the run. We had a naming with one of the more quiet girls finally getting christened after 10 runs. So double digits it is. Butterbitch took a delight in pouring a stubby all over her. The highlight of the evening was the expectant mother who despite her ever increasing belly pushed herself to make her 100th run before the birth. I had to include the photo of Red carefully filling the two down downs for her and the baby, 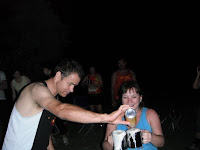 both of which were worn by 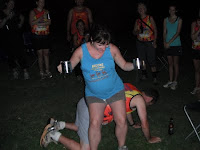 her chair and father to be AT. Well done Westpac. The first pregnant woman or man to make the Broome Hash 100. The night ended with food a la Subway and cookies and people standing around drinking beer and Butterbitch wandering around wondering why no-one never never understood his drinking game. Happi photos. On On. 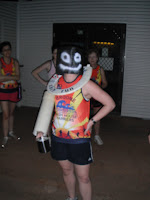 It was the turn of Octopussy and Dora the Whora to set a shit runs out at the Surf Club. Hash doesn’t have any rules but if it did it should be that you can’t set a run using blue chalk. It’s almost invisible but in saying that it is a good way to keep the pack together. Now I said runs and that’s not a typo because everyone seemed to do a different one. I enjoyed mine. On the occasion I did stumble on an arrow it was going the wrong way (or I was). The other thing that catches young hares is that kerbs and paths near 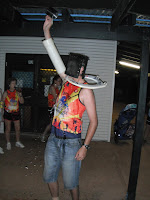 nice green grass, particularly in that area are watered each night and the checks and arrows simply disappear. But everyone got a workout and made it back safely and Octopussy wasn't murdered. Unfortunately there is no circle report this week due to legal reasons. While we encourage you to bring a friend to Hash we need you to explain to them what Hash is about and maybe even suggest they read about it on the net before attending. Wikipedia would be a good start. http://en.wikipedia.org/wiki/Hash_House_Harriers.

The food was great and even edible by vegos. The Brownies were really good but kept jumping into my mouth. Good effort guys. See you all tonight. On On.

Posted by faucet at 6:30 AM No comments:


Join us for a Run around town to celebrate Shinju!

$10.00 for the Run includes a Beverage or two and a barbecue afterwards at Matsos Broome Brewery.

Bring along someone new or get off you socially active/physically inactive enlarged ass!

Thanks to sponsors Matsos.....Broome Hash- Matso's Beer Drinkers with a running problem....
Posted by Red at 1:35 PM No comments: