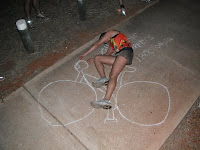 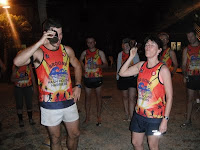 and Virgin hare Warrick Slangs Bitch set a shit run from the hospital units on Weld Street which attracted a couple of dozen of us. A few of the regulars were notably absent and missed out on a Hash first. Some of the lucky runners in the bush near Demco stumbled across a traditional ceremony being performed. 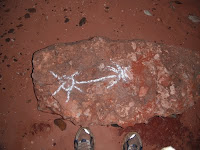 It involved a man with his pants down and a woman on her knees. Unfortunately I wasn’t sucked in by the false trail despite WSB’s continuous on on calls and missed all the action. We also paused down on Demco reserve to lament the passing of Yama’s bike. The hares had drawn fitting replica on the path and Yama had a ride but it obviously wasn’t the same and 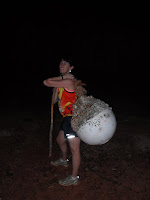 we had to move on, following those imaginary checks and made up ons. At some stage on the beach Bogger managed to pick up a boy but it was all a bit fishy so she dumped him for something better. There was a hash halt with a delightful fruit punch at Deep Throats and a pretty little HH symbol which matched the pretty arrows and sunny checks. Cock in a Frock was Cock in a green dress for the Circle. We had a couple of virgins who had to 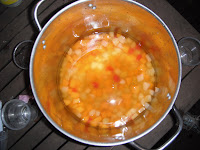 dance around the ancient Inca Coconut, we had returnees, Bubbles and Vagrant and Faucet had to have a down down for media because his daughter was in the media during the week. That’s not fair. The food was great if not poorly timed. We had a nice chilli con carne sin arroz. Translated that was chile con carne without rice. Apparently the rice was still not cooked after we had all headed home. There was also a nice dahly thingy and ice creams. Not together and without rice. Bogger got breathalysed on the way home with the trailer on but got through unscathed. 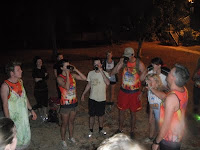 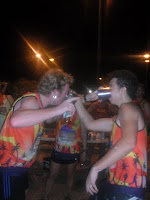 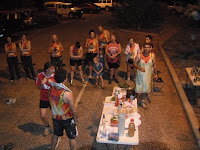 Well you had to run a bloody long way on Urinal and Tackle Box’s trail to discover how shit it was. The word from the athletes in the group was that it was up around Willee Creek and back again. Starting at the Surf Club the walkers did their bit easy and the smart runners took the shortcut at Frangipani and were back and on their second beer when the last of the runners staggered in. I should say well done but I’m really thinking wankers. I decided that I’d take the photos this week as someone pointed out that something was wrong with the camera. Apparently none of the photos of women had shots with their mouths shut. I figured out it was just a shutter speed issue. AT was the RA and couldn’t wait to get into Butterbitches green dress. I must admit he was looking pretty hot. Not. The hares got downdowns with the gimp and the pipe and Tackle was moaning about her football top getting wet but how stupid are you to wear that and not a hash indestructible singlet when you set a shit run. Admittedly the down downs don’t usually have beetroot juice in them but hey it matched her top (except the white bits) and she was the one who brought the tinned beetroot anyway. We had a couple of visitors who lent us their cowch or actually we just took it as we had 2 birthday people, Cock in a frock and Glamour Puss I think, to ice. Somehow they ended up standing up and Warrick Slangs Bitch and Love you long time took their seats and later sang them happy birthday as a nice duet. I think they ended up there because they couldn’t even pull a bird after the Broome Cup with the offer of a free lift home. We had 3 virgins who I think ran the whole thing, wonder if they’ll be back? We had Urinal and Cock in 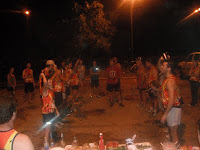 a Frock drinking each others down 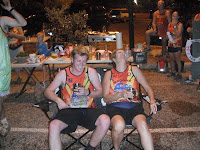 down, not sure what that was about. We then had some sort of down down race and again not sure what that was about either. I did feel a bit sorry for those who got the beetroot down downs instead of the special Guinness and cider ones. The food was burgers which were expertly cooked on the barbie by AT who also had a lesson in serious Vego cooking and seemed to do okay. I can see now why Tackle doesn’t stay for dinner. That’s enough.

Posted by faucet at 1:00 PM No comments: 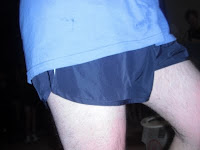 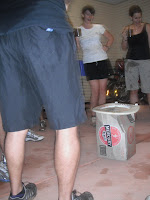 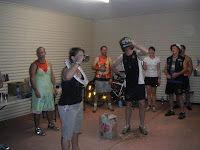 How can it be Monday already? Did we skip a few days? The Cockup and Cracker RU run pulled a page full of runners for the first entry in the new Hash Book. It was a long 6.5 km run around Old Broome and quite a few of us earned our beers by the end. The whole thing was set in flour and had 3 RU’s or Round Ups as Cockup is getting on a bit and thought he needed to slow the leaders down a little. The sprint home from near the Conti brought out a bit of competition and testosterone. One of the fastest runners was Butterbitch who couldn’t wait to get back to the circle and show off his new green dress. And he looked a treat. I think Tackle box had the camera so I have to wonder about her and what she photographed. I’m not sure what is the 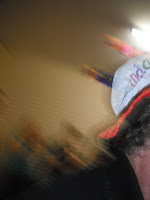 most photographed thing in Hash. It’s either Westpac’s belly or Urinals shoes.

Back at the Cracker and Cockup love den we had a couple of virgins, a few returnees and a naming but stuffed if I can remember what it was. Can someone post a comment and tell me. There was plenty of singing and a quick swing low. There was other stuff and things happened but I have to finish so I’ll move on.The food was soup again which tasted great but if we have it again tonight we have to register with the Shire as a Soup Kitchen. 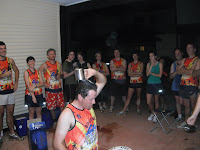 Tonight is the Surf Club. On On. 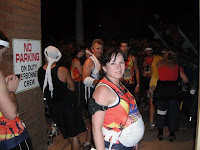 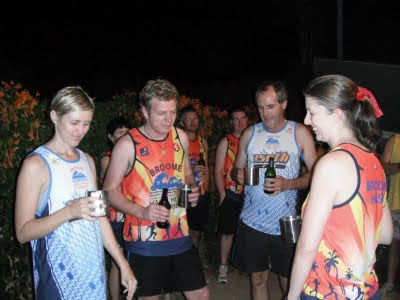 Last Monday night’s Hash run at St. Johns Ambulance Depot was the combining of two well respected community services that not only share common values but also members. Faucet, Quickie, Cockinafrock and Ivanah Humpalot share their time between helping those who get sick and running with those who are sick. 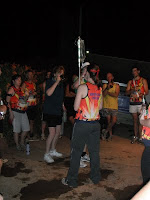 The similarities are amazing. St John’s crew spend time searching some of the less fortunate parts of town at night with torches. So do Broome Hash. We both have uniforms that stand out. They have a siren we have a horn. Many of the people they have to deal with are affected by alcohol and the same at Hash. They are often in discussion with hospital staff as are the hashers. I could go on and on on. The run was fantastic despite people getting lost and Warrick Slangs Bitch holding up the circle while he wandered around town with a virgin. The area the run covered was some of the more dodgy parts of Broome so as a clever ploy the ambo crew pre bandaged the runners so they would not only blend in but also be looked on mercifully by the local residents. The neighbour to St. John wasn’t overly happy with the circle songs and as well as yelling at us over the fence apparently made a complaint the next morning about the colourful wording of our songs. 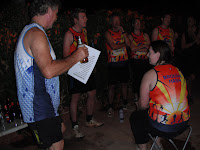 Thought it a bit strange considering some of the other neighbours. Shit. Look at the time. Wombat was the RA. We had 2 virgins who danced around the Ancient Inca IV pole, a couple of media down downs, Rainman on Ice, not sure why, 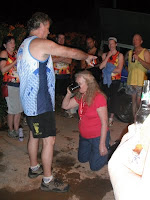 Sister Pubes as well for getting engaged, fair enough, and a naming. Stationary Crab. 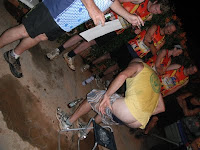 Sort of a combination of being a cancer and working at Boss. The soup kitchen had three types of soup which were lovingly cooked by Quickie and two types of breadrolls. And we donated $250 to St John Volunteers so they can attend a Country Volunteers conference in Perth later this month. That’s it. Gotta go.

Posted by faucet at 6:22 AM No comments:

Posted by faucet at 7:16 AM No comments: 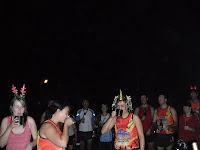 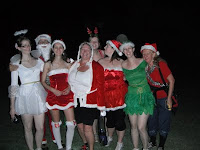 I’ve always thought Christmas in July was a bit wanky and so I guess it was fitting for Broome Hash to have one and for it to be orchestrated by Slang, Deepthroat and Franger. First up, it was impressive that many people put in a lot of effort. I went as a wise man bearing a gift of Gold (a dollar coin in my pocket) but no-one seemed to pick up on it, they all seemed to busy looking at Jesus, Mary, Santa and the Christmas tree angel. The biggest shock of all I guess was the run. Let’s face it, Slang usually sets pretty shit runs but besides everyone missing the Hash Holt it was pretty impressive (and long). The pass the parcel in the park part was new and fun although there was some dodgy singing and I never seemed to get to unwrap 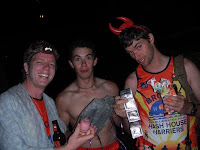 the parcel and Yama got it several times. The last pass with the on home was pretty cool I guess in a childish immature sort of way. Cockup led the circle like 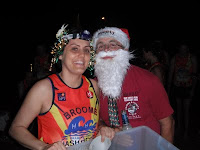 a man on a mission. Probably the quickest circle ever considering all the things that went on. There was a Chris Cringle thing where people ended up with condoms and candles and useless crap and somehow Bogger ended up with some sort of noisy chicken sex toy which kept several juvenile people entertained for the rest of the night. There was a big tall virgin, a couple of visitors from Queensland and we all sang swing low. Catflaps, Ivanhumpalot, Sister Pubes and the Xmas tree angle got to down a beer for the extra effort they put in to dressing up, although they ended up pouring it over a slightly pumped and semi naked Urinal. 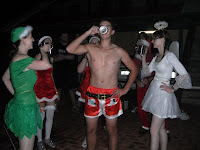 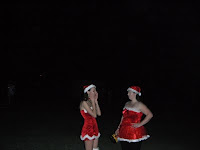 coming in at the end and telling them to fuck off out of the way and taking over. Turkey breasts, roast potatoes and vegies followed up with alcohol soaked and partially flaming plum pudding. Despite Slang trying to encourage people to get into the xmas spirit and start a fight it all ended well. And someone broke a stubbie. Ooohh. 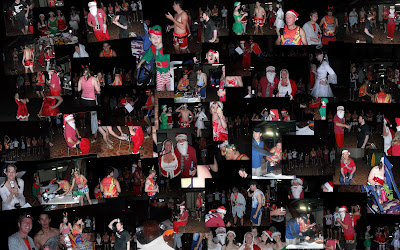