Brush off old glory and get on down to the Kimberley Bookshop for this week's independence day run. 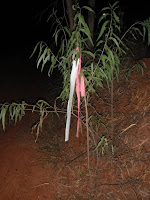 So. That run was shit. Shit run shit food and shit venue. What can you expect from a couple of old hashing hares like 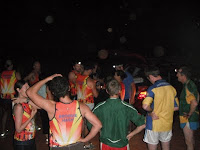 Wombat and Jackoff. I believe Wombat filled in for Brazilian Coathanger who hasn’t been hanging around much lately. The usual couple of dozen turned out at Blue Haze and although the numbers seem to be pretty steady the faces are always different. My thoughts are that it’s too bloody cold to go outside after dark and dark it was out in the scrub behind the light industrial area. We had to search for little pink and white turn right streamers and toilet paper on ons hanging from trees. The first hash halt was easy to find as it was almost around the first corner. Shots all round. The second hash halt was harder to find and infact wasn’t so we ended up having that one brought to us at the end. Faucet ran the circle due to no RA’s and Wombat being a hare. We had to drag Jackoff out of the kitchen to have her down down. 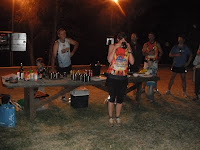 First up were a couple of returnees with Rainman and Softcock (formerly Viagra) sharing a down down with Quickie who made some dumb blonde comment about returnees. Then Tacklebox had one for becoming an Australian during the week. Her attempt at the national anthem seemed a bit dodgy as I don’t recall the bit about waltzing matilda in it. We had one virgin guy who seemed to be enjoying his dance around the Ancient Inca empty sakata biscuit packet rock. Kimbo the owner of the venue had a down down just because we said he had to but he put it away as if he’d had a few before. Bogger got one for getting pissed at the races and not remembering who she went home with. I think it was Premature or little Premature who got one for 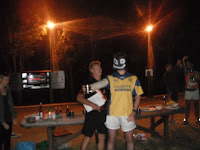 sneaking off before the circle finished last week. As this was a serious offence he also got the gimp and the pipe. The last down down went to Slangs Bitch who was bitching about his name. He could always just go by his last name. Where is Slang these days? The food 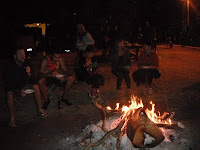 was the best 5 bucks you could spend in Broome with 3 choices of hot dishes of scallops, prawns and vegies with either rice or pasta. All in copious amounts and eaten around a lovely big campfire. There was also TV snacks as dessert and the yard we were in actually had a big screen TV although it was just playing music on the night. Yep. I told you it was all shit.

Posted by faucet at 5:57 AM No comments:

It's been a long long time coming but finally Westpac and Barge have pulled their finger out and organised it.
All you need to do is let me know if you are coming or not by next Wednesday 29th June.
We are going to Tong's Chinese Restaurant 10 Napier Terrace at 7pm on Friday 1st July
Hash are buying the pre-ordered (which includes vegetarian) set meal and you just bring along yourself & partner.
Tong's is BYO so bring your own G.
Non hashing partner or friend will need to pay $20 a head on the night to Westpac but still need to know all numbers by the wednesday pls.
Please DO NOT just turn up on the night!!
Posted by Red at 3:38 PM No comments: 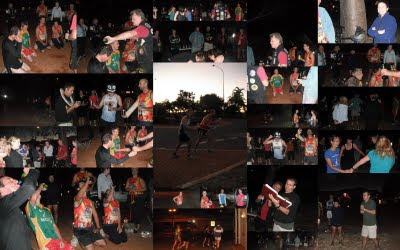 2 second blog. Faucet and Puller set live run at generic location to show how easy it is to set a run even if you start at 5.oopm. Puller is very nervous. Then he was excited about being chased and then scared when he ran so fast he was near the end of the run and almost caught the pack as they were just starting off. He hid in the bushes until they were gone. Good plan. Couple of dozen people who seemed their way around okay and ended up back in Chinatown for the circle opposite the post office behind the no alcohol sign near the boab. Red and Anal Tool and Wombat charged a few, made the 4 virgin girls dance around the ancient Inca beer carton rock and generally waffled on. Four namings or actually 2 paired namings. Tried and Failed and Premature and Little Premature. Pretty tame names really, we must be in a mellow phase at the moment. Food was brought over the street. Fish, chips, chicken, rolls and salad followed up with choc chip cookies and a schnapps to warm our cool bodies.

I thought it was a good night which is the most important thing I guess. On on til tonight. 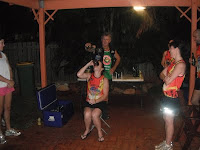 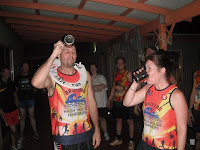 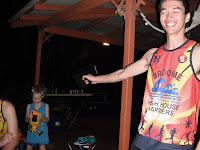 So the Pusher and Puller long weekend show managed to still pull in a good crowd despite missing many of the regulars who were obviously too worn out from their day off to go running. And run we did. Lots of short checks which means no breaks for the mid range runners when you have Spec out in front. But it worked up a good thirst and the eskies were full of cold beer. The pool was heated but was only used for ambience as the weather is not that conducive to swimming this time of year. Back at the circle Wombat was the RA and behaved himself moderately well. He had the birthday girl who also happened to be one of the hares sitting on an icy stool. Wonder why more people don’t admit to having a birthday? Glad I was born in March when it’s hot. We had 5 virgins who danced around the Inca saucepan with an empty beer keg in it. They seemed to be enjoying the dancing too much and had to be told to start the drinking bit. Obviously they need more practice. We had a couple of returnees with Director and Puller the hare. 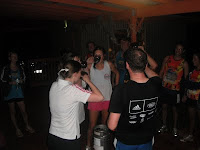 No media down downs or at least no-one dobbed me in for media which was good as the down downs were pretty ordinary. Beer, Solo and Cider. But the food was great. A 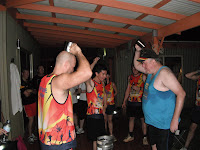 choice of Lasagnes and salad and hash cookies. Great home cooked meal for 5 bucks and no dishes (well not for most of us anyway). Spec had fun with after run sports as he shot the little hash boy with a gun. That probably sounds a bit weird; maybe you had to be there. Too late now so better get along next week. I promise it won’t be as difficult as the last one. Or not.

Posted by faucet at 1:55 PM No comments: 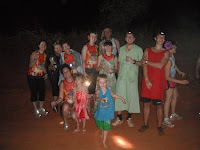 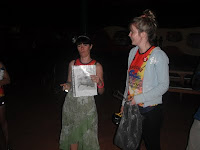 Well you can’t really call that a run can you. Maybe a quick canter for a few furlongs between drinks. Actually, maybe that’s true as I just looked up how long a furlong is and it’s 201 metres. Now there’s an important piece of trivia to remember to impress your friends with out at the races. So Bogger and Deep Throat made a couple of dozen sensible people dress up in silly race gear and then feed them cheap champagne and chips from buckets with horsie pictures on them but hey, I heard people say it was good so who am I to say it wasn’t a shit run. Matso’s via touch chucked in the left overs of a flat keg which was quickly polished off by the shelter people, as was the food. 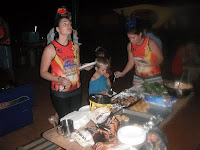 Cold but appropriate for the occasion. Red was the RA and despite no virgins, returnees, media or birthdays he still managed to keep us entertained. 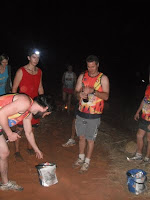 We had a few people up for namings but only one got through. Slangs Bitch. Sort of sounds like the name of a horse really. 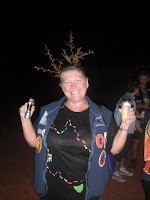 Anyway Slangs Bitch who is apparently really Penny’s bitch or however that works was christened in the traditional manner. A few of the photos probably need some clarification. Is Octopussy saying grace before she eats? And why did Pusher leave her poor child in the pram on the middle of the road in the dark while she drank champagne? 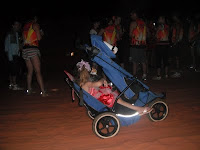 And who's the cheapskate with the eco fascinator? Anyway a different sort of run and one of the joys of Broome hash where you never know what you are going to get. On on til next week.
Posted by faucet at 10:24 AM No comments: 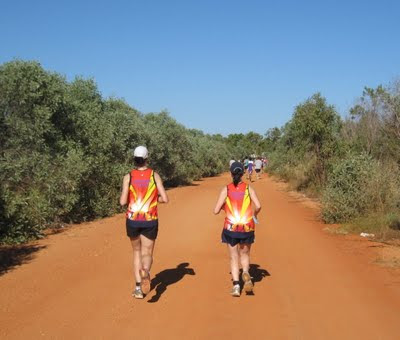 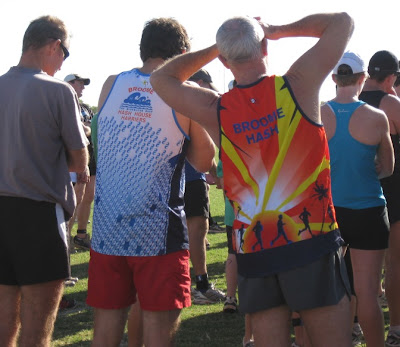 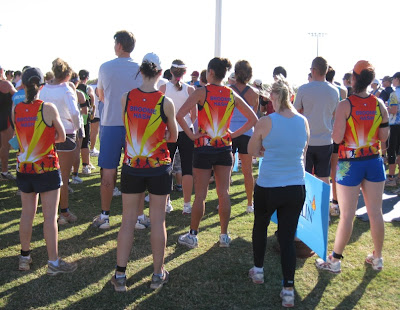 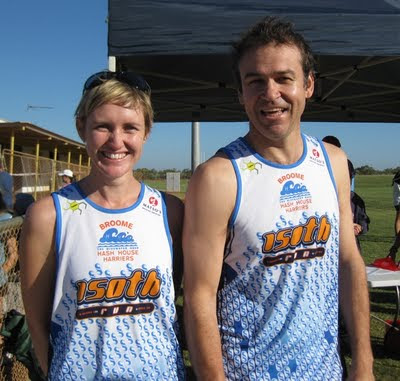 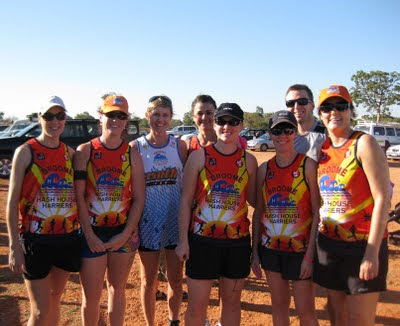 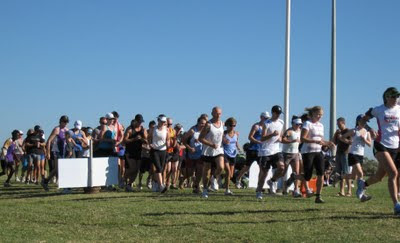