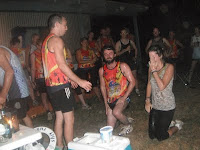 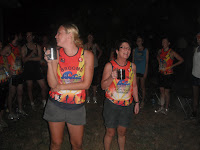 Well, like last weeks run the blog will be shit and short. Mad Cow and Grunter had us running around Roebuck, confusing us with 2 dot flour ons and a hash halt outside some random persons house. Don’t know what they would have thought we were doing but if they had followed us and peeked over the fence back at circle central they may have ran off in fear. A naming ritual where a guy was named Efuxer and a girl called Morning Glory had beer splashed all over them. 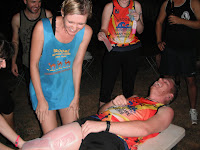 Then a horrible white hairy arse sat on seat of ice. Followed up by a young boy having leg hairs ripped from his body by a pack of cash wielding women. Even I was cringing. And then everyone sat around and had a jolly old feed as if all was normal in Roebuck. But we know better!
Posted by faucet at 10:06 PM

Not the best week to remember the camera......

is that because it is your lilly white arse?