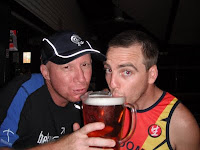 So how many yogi singing hashers can you fit into a Landcruiser? Six hundred dollars and 4 demerit points worth. Who’s idea was the pub run anyway? Slowlane and Blondie and somewhere in the background Red. Things started off well with a everyone having to earn their first beer at the Satay Hut by 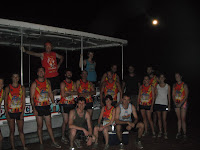 running around in circles and climbing over a fence. Quickie seemed to be the only casualty with a shin cut and shorts rip. The 30 of us rushed in and then rushed back out of the Satay Hut and headed for Matsos via the moonlight mud of Roebuck Bay. Not sure what the empty esky was about but I’m sure that during the beer drinking, planning stage it seemed a great idea. So what do you need halfway through a run. Some wholesome Matsos beer and conference food. But then a bus, yes Faucet, a bus, which is a vehicle designed to carry large numbers of people 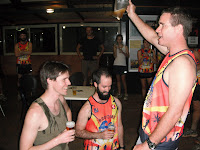 safely and legally whisked us away to Cable Beach where we started all over again. The first section was rather short and found us filling the bar at Zanders. Sort of dining entertainment for the tourists. We do make an unruly spectacle when we turn up in numbers in our flashy singlets. More beer, another song and off to aimlessly wander the streets back to Divers. More beer and the circle. The hares had the first one for a shit run and deservedly so. We had a couple of virgins that danced around the Inca chair. Red had to drink a collection of dregs collected along the way by Jackoff of which he ended up pouring most of onto his head. Celine did the titanic thing again but it just didn’t seem right without Urinal who seems to be the only one 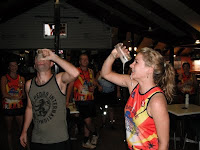 who knows the words. Love u long time and that girl in the photo got charged for something. She should be charged with dribbling but then she obviously finished first so doesn’t deserve condemnation (click on the photos for enlargement). Pusha came along without her kids and behaved herself and so should get a down down for that next week. And then we learned a new song. “I know a bear that you don’t know, Yogi” What a stupid fucking song and what’s worse is I find myself singing it, even now. It was one of the virgin hashers that introduced it and did so with style so he ended up getting christened Yogi and his mate with the fashionable Islamic beard got christened Boo Boo. Yogi and Boo Boo it is. 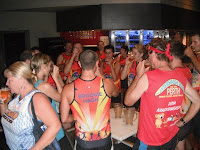 There wasn’t really any food to critique at Divers, just more beer, which was beer, except for Faucet who was drinking Hahn Light which was fortunate for him as it turned out. The dregs of the hash crew piled into Faucets cruiser and headed home. Unfortunately in the quiet dark streets around Yammashittasuckerfish’s house in the LIA the cops pulled us over and we paid the price. But hey it’s a good bonding story and might stop Cockup telling us we’re a softcock hash for a while. As a follow up I ended up having to work with the same cops on ambulance duty next night and when they realised who I was they avoided me like the plague. And thanks to my fellow partners in crime for the fine contribtions and please stop feeling guilty. I’m a big boy and I am ultimately responsible or irresponsible as the case may be. On On. 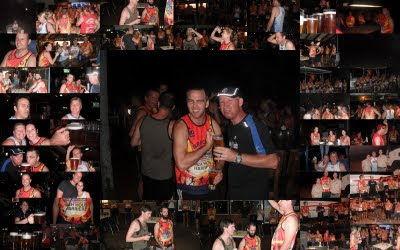