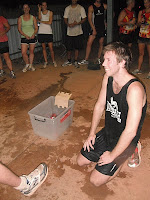 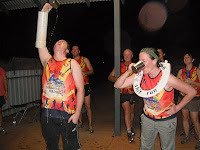 So it was the turn of Tinny Arse and Guzzle Guts to set last weeks shit run and they did so in style. Faucet arrived early which apparently confused some people but he had been given the important task of picking up the Matso’s ginger beer on the way. There was a page of people who set off; the walkers had a map, the runners no idea. Apparently some of the runners ended up on last weeks trail, others just got lost and a few of the guys 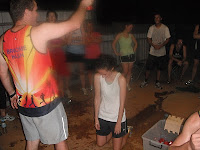 just ran around, semi naked, pumping up their bodies until they glistened with sweat and then ran back to act as eye candy for the girls. A.T. ran the circle and critiqued the hares then the hares brought out this shit bottle of Mango liquor shooter stuff that their grandmother had given them for xmas and they didn’t want and made all the people who missed the right trail shoot one. That was everyone. There was a virgin who did a pretty dance around the Inca stone. There were two namings and my senility has combined with my tardiness and I forget what they were called. I feel embarrassed as it was probably such an important thing to them. Sorry guys. So can some young person with a complete set of brain cells comment them in for me? There were a few big announcements with A.T. telling us he’d made a deposit in Westpac and she won’t be available for a run one week during October. Well done guys. That’s right, I wanted to mention the guy that took his partners down down for her. What was that about? Butterbitch finally ended up getting his 50th commemorative mug which has been well earned. Urinal on the other hand is running away to Perth so he won’t get one. Hash just won’t be the same without his funny accent and gorilla shoes. And Stealth, if you are reading this, we all hope you are doing well without us. The food was pretty flash. Looked like fish but tasted like pork. Didn’t ask but I think it was couscous and salady stuff and then cake for desert 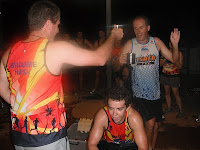 I don’t usually mention the hash trailer on the blog but the hares handed it back in such good condition I thought I’d got the wrong trailer. I never realised it could be so neat in there. Can you come to my house for a visit? Deep Throat was the camera girl. See you all next week.