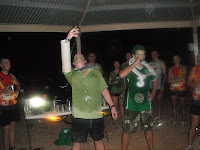 Not to sure who St. Patrick was but I’m sure he’d be proud to have over 40 people dressed in green stuff, running around the streets and beaches of Broome trying to catch two young lads called Cockinafrock and Urinal. The boys set a live run which went well even if it was a fucking long way. Actually I have to take that back as I just checked it and it was only 5.5kms plus onbacks. Maybe I’m just getting old. Come to think of it I did turn a year older that day, but then I didn’t come in last either. There was a very memorable moment 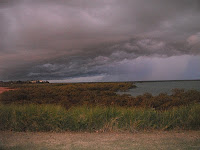 when we were running along towards town beach and we suddenly got hit with a cold breeze. There is a photo of it but it doesn’t quite have the same effect. Nice photo by the person I gave the camera to. I think I’m losing it a bit as I can’t remember who that was or even who ran the circle. There was Red and Slowlane and I think Butterbitch did a lot of the talking. I think we are going to need crowd controllers soon. Barge and someone from Scrubs had a media drink as Cracker was off on a photoshoot somewhere and Wombat and Jackoff gave us an update on the Tassie Nash Hash, We had about 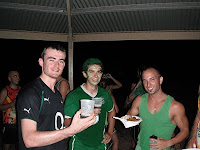 10 virgins turn up, most of whom were med students. Not something I studied when I was at school. The Inca stone wasn’t available (where are Anal and Westpac?) so they danced around an old orange which may have been a tad unkosher. Isn’t there some thing about the orange and the green in Ireland? It was good to see that dressing up was the norm and most people made some sort of effort even if it was just wearing a potato and that bitch Uranus wore a flasher potato necklace than me, The down downs were decidedly dodgy with some green stuff which I’m guessing was a green version of Matsos famous Ginger Beer. I just had a quick google and read that St. Patrick died on the 17th of March 461 and is buried in 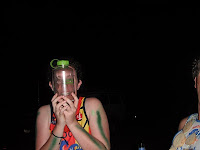 a place called Downpatrick. A bit eerie to be sure. It also said he used the clover to preach the holy trilogy. You know, the run the beer and the food. Speaking of which there were also cans of Guinness available to wash down the lads homemade Irish stew and mashed potatoes. Slang brought a friend and sold some shirts and hats. And what was the thing where Muppet, Red and Stealth sneaked off to the beach. Stealth is leaving us soon but maybe we can keep a jar of her.


It was a great night except for the fact that Yamasittasuckerfish had her bike stolen. Hopefully she’ll be back next week with her bike returned.