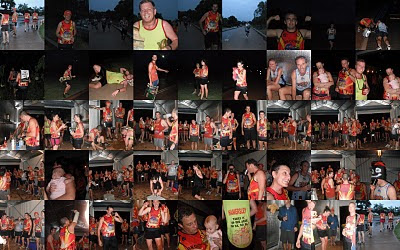 Through the eyes of the virgin

Oh my God. I went to this hash thing on Monday night. I nearly died. There was like 35 people there. Seemed a sort of normal roebuck shed and most people looked okay in their orange uniforms except they brought empty beer cartons with them. This guy named Anal Tool pointed at a broomstick tied up with pink ribbon and then we were off running the streets, or at least that’s what I thought. People started yelling out on on and others stood around lost and some guy called cock in a frock had a trumpet. We ended up leaving the nice path and went into a drain. I’m not joking. People were running through the mud and the water and I struggled to find dry bits to step on to keep my shoes clean. I didn’t want to be left alone in the bush in the dark behind one mile so I had to keep going. It was hard to look like I was not with them but not be left on my own. And this Bargey girl kept taking photos of everyone, hundreds of them. We finally made it back to the streets only to end up in Broome North and more mud. It was so slippery this 47 year old guy Red fell over twice and one time fell on a sweet young girl called Stealth. She hurt her ankle but no-one seemed to care. They were like a bunch of pigs playing in the mud and they got their shoes dirty and then they ran through another drain to clean them. I’d had enough but I didn’t know how to get home. I heard this lovely guy called Faucet talking to another guy Woodpecker about shortcutting home so I followed them. Somehow everyone turned up back at the house at the same time. Then instead of warming down they just started drinking beer. Next thing they form up in a circle inside this shed (which was a very nice shed with opposing roller doors and a crooked purlin on the eastern wall). Anal tool and another guy called Butterbitch (it’s true, that’s what people called them) started some sort of service. I slunk to the back and was very quiet and hid behind this girl called Gash who had a baby who was called Splinter. I probably should make an anonymous call to DOC about her. And then OMG they started singing. Not like a choir, just dirty songs and even the girls joined in. Then they brought out this Inca Stone from like Peru or somewhere and started asking for virgins. My friend went forward while I tried to disappear. I don’t know how they knew I was a virgin but they were trying to get me into the circle. I was pretty scared but managed to bluff my way out. My poor friend had to dance around the Inca stone while they sang like a virgin. It hurt my ears, I wanted to cry and then they started this down down down thing which seems to be how all their songs finish and she had to down some sort of drink out of some tin cups. I’d seem them pour some yellow looking stuff form a plastic bottle into the beer. And the cleanliness of the cups was suspect. I don’t think they even washed their hands. There was one sensible girl called Booberator, who wore a raincoat and they made her down a beer just for doing that. They made up all of these silly excuses to make people down beer and then when they finished they had to put the tin cup upside down on their head. Just when I thought it couldn’t get any worse they bought out this pipe thing which Butterbitch had to put on his arm. It was so stupid as he couldn’t bend his arm and poured most of his drink over his face. And OMG this other mask thing they had with a face painted on it. The old guy called Red had to wear that which looked okay on him but then he had to drink with it on. Like, how stupid is that. All the beer runs down your shirt. There was also this tall guy who went though this ceremony to get a name. They named him Brazillian Coathanger. I think it was something about how he was doing Zumba when he should have been doing Limbo. Next they brought out this book and started asking for people to have runs at their house. Yeah right. I think they should give the book to the police or mental health. Apparently they had food made by a girl called Westpac but as I wasn’t going to eat that as I saw a break when the circle thing finished and bolted. Hash. I think they must be on it.

I concur (if thats how you spell it)