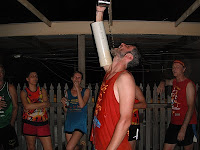 Yet another shit run set by an old shit run setter, Conchie and his new side kick Pox. I guess you could also call it a pox run. Not ones to suffer from obesity or lethargy the boys ran us all over town, with long on backs and dodgy neighbourhoods. Spec and Quickie were setting a blistering pace and saved most of us a few K’s. The sunset was pretty nice and the light sprinkling of rain was pleasantly cool without washing away the arrows or any of the other weird marks. 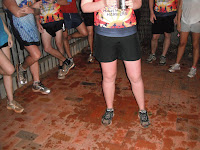 There seemed to be lots of people at the end so I’m guessing we all made it back, even Urinal who started late and was wearing his funny shoes. Red was the RA. The hares took there down downs with Pox wearing the hash pipe like a bracelet. We 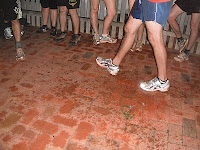 had a couple of special returnees with Vagrant and Booberator back after a long long break. Boobs also got her 50th cup which we’ve been using for the past year and it was her birthday as well so she wore the Gimp despite her pleas of claustrophobia. Stealth also got the birthday song. We weren’t sure weather Cockup should be a visitor or a returnee so he got both. We had a hasher who’d been blown over from Tully by cyclone Yasi. Cracker was back in the media as well as a few others. We had a couple of shoe drinkers and Downstairs Servicing always up for a bit of attention drank a down down through his sock. I could see a few of the girls were impressed but obviously to shy to take him home. Father Wombat led a nice prayer to which the circle joined in reverently. Cockup also lead the hashers 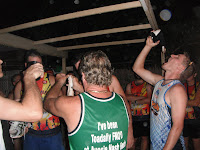 through a melodious adaptation of Swing Low which the new camera captured on Video. I have a new system now where I volunteer people to take the photos for the night. Sort of a mentoring role for new talent. Octopussy is definitely a leg girl.

Some kind person, who was locked in the kitchen cooked up a slab of cow, slapped some butter in some rolls and we combined them with gravy for a healthy carno dinner. There was some sort of seeds on the rolls for that bit of vegan in us all. Opps and there was a curried egg side dish. Which was for the vegos I guess. Or seconds for some of us. Couldn’t believe how much Spec could eat. Slang put in a funding request which was happily accepted but cost her a down down and a bit of an icing. 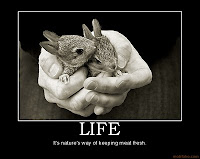 t week red dresses and Faucet’s 100th run. Be there.

If you're going to palm of the hash flash job then you should at least instruct flashers to focus on heads.....