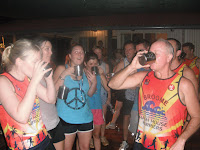 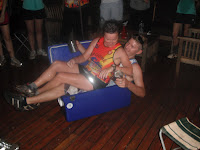 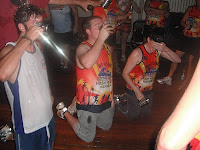 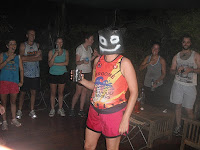 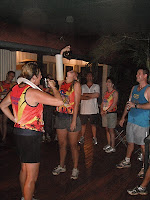 So Grunter and Glamour Puss managed to set a Roebuck run that actually stayed in Roebuck and was even mildly unshit. Thirty seven people and only lost a group of half a dozen or so who probably did leave Roey. It’s simple guys, just follow the arrows, there was plenty of them. The things on Gubinge may look like arrows, I agree, but the real ones aren’t painted on the middle of the road and have a pointy bit on one end. We emptied the esky at the hash halt and got sick of waiting for the fast boys so we took off. A.T. thought he could outsprint Faucet but they both gave up at the first roundabout. The walkers made it back on time and only the lost boys straggled in late. Flash big deck for the circle. Butter Bitch did the job and did pretty well for a boy. Although he had a bit of trouble controlling the enforcers. The hares got the toilet seat with Grunter using the hash pipe. She did a pretty good job and set a good example for those yet to pour beer all over there face. Your turn will come! We had a few returnees and 5 virgins who did the dance around the Inca rock while we sang Madonnas finest. Slang. What was that thing on your head and where did it come from? I like it. Good look. Not sure why you ended up with it though. While I’m talking about you I should just remind you that as a new Australian, pussy and pussy are homonyms and are two completely different words and care must be taken when combining the word pussy with the word sores. I realise the one you were referring to was the yellowish or greenish fluid that forms at sites of infection, consisting of dead white blood cells, dead tissue, bacteria, and blood serum but for the others within ear range that were not looking at your legs this may lead to the spreading of unwanted rumours. Speaking of Pox, we had 3 namings Pox, Tinny Arse and Guzzleguts. Pox I’m not sure about but the other two had something to do with winning a boat and drinking beer, Fair enough. The media fines somehow turned into a farcical boat race with the Hashdragonboat team obliterating their Zumbarring opponents. Barge and Downsatirs servicing were misbehaving and ended up having to sit their smart arses in the esky of ice. They both seemed to enjoy it so I doubt it will curtail their insubordination. And Red, what’s this facebook shit. Who’s ever heard of facebook? I’m still trying to understand this texting shit. Maybe I should get a different colour texta. The food was roll up thingies and chocolate cake. Bordering on healthy I’d say.

Photos this week are courtesy of Deep Throat who obviously has more than one talent. Or maybe not.

Hockey Masks have got nothing on that thing - that is scary!

next week a special chainsaw run!