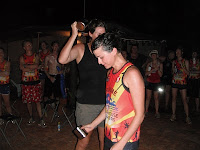 Yamashitta Suckerfish. What a great name. I’m sure its unique in Hash World. The other hare, can’t remember her name, opps, sorry. Anyways, they set a shit Pseudo Australia Day run. The bit near the sewer ponds smelt a bit shit and a couple of times when I went the wrong way I said shit and someone 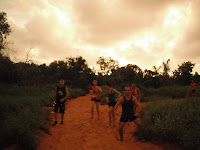 I was running with was talking shit so hey it must have been shit. Come to think of it there were also a few shit heads that kept jumping in front of the camera with juvenile muscle man poses. See photo for evidence. I have more. I think a few of the short cutters did well on the night and the fit people got a good workout and the smart people like me missed most of the false trails and made a timely return to get into the eskies, we even managed to pass the walkers of which there were a few. I bet you didn’t know that shit doesn’t come up as an option in spell check if you happen to spell it wrong and it also has no synonyms. Maybe I should email Bill and suggest a few. The circle was big with Red and Slowlane doing the honours in front of a crowd of about 35. A bit melodramatic with the lightning and crap ( a synonym). The Hares first, did it easy. The enforcers were a little quick I thought but nothing like the old days when Slang was in form. Westpac and Red took media down downs (I’m yawning, does that mean I’m tired or boring myself to death). Westpac had to do it with the Hashpipe as she was on the Front-page of the Advertiser with some sort of Vampire story. Notice the action man camera shot. 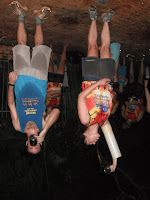 Red was boring people to death on the ABC. Not even sure what he was doing, I guess I could ask Conchie. Actually I do remember something about Red having to incorporate the words downstairs servicing into his talk. Mmmm, anyone hear it. Please feel free to add a comment. I just realised that Crackafat was there and didn’t even get a media down down. Now there’s something you don’t see very often. We had no virgins, sad, but a few returnees. We’re actually getting a few people who are coming up to 50 runs. What tossers. And Conchie and Faucet are almost hitting the ton. What heroes. We did have a naming with “Happy ending” entering The Book. I thought it was a bit of lame name but others thought it was really good. Just goes to prove my point I guess about the mentality of hash people. She got down on her knees in front of AT, her marinated her in beer but he didn’t get a happy ending. Maybe that’s it? Urinal got one for talking about training and running on a run and Slowlane got one because he suddenly realised he got the get married and have children thing the wrong way around and did something about it. 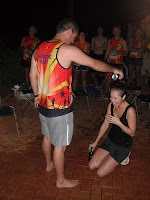 Do I hear a sigh from the Hash girls. I thought not. Stealth and Slang got one for something and Wombat got the Bogan award for the Aussie of the night. And Yama’s Dog throws it’s own ball in the pool and then jumps in to rescue it. I missed the warning about the vegetarian sausages as a few of us sat out in the beautiful downpour that started when the circle ended. I only had one bite and put it back (another synonym). The real man style sausages were much better and some tayter salad and lammies and timmies for desert. 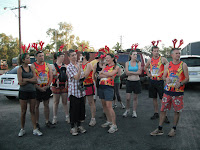 Okay, okay, okay stop crying. I’m back. A new year, new camera and new excuses, actually I wanted to get this out early but only got my computer back last night so I’ll have to reuse one of my old excuses first up. You don’t care do you? 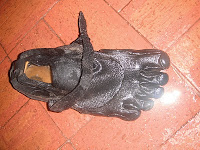 Well good to see Hash can survive without me. I put up with a poxy broken camera for 6 months and then come back and find we have a new pretty blue one, but it already has photos on it. There was a picture of a bunch of tossers with reindeer antlers, actually several pictures. Why did Barge only have 8 people in her spa when we know it holds 23, and what’s with the foot shoe thing. Where did that come from and did someone have to drink a down down out of it? There was some sort of blurred photo they may have been the case but it’s hard to tell and if it were true then I guess the photographer could have been excused for being in a state of laughter while taking the shot. Can someone please enlighten those of us who weren’t there. There is a comment button at the end of the blog for this purpose. Just ask your mummy to show you how to use it. 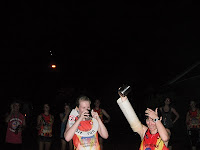 So, Run 211, I was there for that one and so were about 35 other people. Bogger and Deep Throat had the challenge of setting a run that would more than likely be washed away in this glorious rain we are having this year. The run was easy if you listened to the lesson about pink bits. One pink ribbon was on, two pink ribbons was on back and the pink ribbon without the dangly bit was a check. Girl logic but it worked well if you could find the ribbon. The circle was good with A.T. at the helm and Red as his bitch. Deep throat got to wear the seat and Bogger had to use the hash pipe for the shit run and for some reason used the occasion to have a beer eyewash.. Sorry the photo is pretty crap as not only am I going blind (probably because of the reason my mother warned me about) but it’s new and complicated and will take me a while to master. We had a few virgins to play with and heaps of returnees to welcome back. We also had a naming which was pretty funny. In a search for a suitable name someone mentioned that he was an aircon mechanic to which Slang burst in and said she required his services upstairs and so ‘upstairs servicing’ was suggested until Stealth chipped in that it was really her downstairs that need servicing. So he’s now christened “Downstairs Servicing”. We also had some new shoes. Faucet turned up with shiny blue shoes to match the new camera and clean socks because he knew what would happen but some poor virgin girl only found out then and there that new shoes mean free beer. 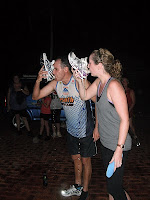 But to her credit she drank a stubbie from her shoe and hopefully unlike the last virgin we did that too she will be back next week. Plenty of food, lasagne and salad and chocy chip cookies for desert but we ran out of beer. Naughty girls. Fortunately AT raced off and grabbed a couple of cartons and saved the day. Thirsty work this running stuff. Next week we’re at Yamashitta Suckerfish’s place.
We need some more gossip so bring it along. On On
Posted by faucet at 9:36 AM 2 comments:

Hare-Yamashitta Sucker Fish
Where-7 Farrell st in the LIA.
Cloudy (Green)pool available for swimming.....
Time 545pm for 6pm off.
Food & drinks yep
Closest we are going to get to Australia day so be patriotic & dress up!

Hares are Bogger & Deep Throat
Venue is 2/29 Hay Rd, Cable Bch below Slang
Food & drinks
On On
Barge
Posted by Red at 10:17 AM No comments:

I hope this doesn't mean I'm going to get ousted like that guy who made that very public apology a few years back....

Sorry that Faucet has gone away and has not written the Blog for so long.

Hare-Uranus Venue-20/2 Robinson st (units close to hospital) (in the hospital grounds?) 545pm meet leave at 6pm Food & Drinks Yes On On
Posted by Red at 9:52 AM No comments:

Pool so bring your bathers & towel & a Towel!

Slip into some runners, get soaked through!
Posted by Red at 10:05 AM No comments: