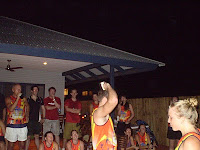 So the two F’s, Fingers and Fluffer set a big run out to eat oranges on the lawn at Willie Creek. The arrows were a bit sad but then rumour has it the both had big hangovers from Matso’s Oktoberfest so I guess we could cut them some slack. They managed to drag about forty of us out to get hot and sweaty and I think most of us made it home, eventually. Back at Roebuck Primary views in the pindan garden, Red and the dog and the Butterbitch led the proceedings with the hares getting down downs first. No, trouble with people putting away their drinks this time of year. We had three virgins who, following our new tradition, which changes weekly, were made to do a conga line around the drinks table. They took it in their stride and even seemed to enjoy it. Virgins are such a good laugh lately. And namings, we ended up with 5 of those. At least two of the virgins 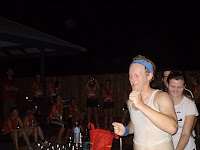 got named first night. I mean if you turn up at hash in one of the village people’s tight white singlets and blue headband and erect nipples then Tittyana sounds appropriate to me. And then if you were the person who told him what to wear to hash then you also need a name, unfortunately or luckily the name Bitch was awarded to another girl on the night, can’t remember why and hopefully won’t find out. I’m sure she’s a nice girl. So anyway back to the bitch in nature and not in name, she got called Prickly Bush which I guess is sensible if your name is Holly. Actually I thought holly was mistletoe but they are totally different things after a quick wiki. I’ll obviously need to check which prickly bush I kiss under this Xmas. And Needle Dick evolved from a compass needle which came from getting lost but hey, not my 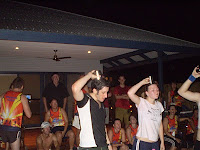 problem as my name’s easy to explain and logical. Last but not least, Cougar, which seems pretty mellow to me. What do they call dirty old men that chase young girls? I wouldn’t know. There was the few usual media candidates and Cracker just had to have one because she wasn’t in the paper this week. The batteries went flat so photos are limited this week. Also noticed there were about 15 bikes there. What healthy, enviro conscious souls we are. The food was great; sort of Nachos come chilli concarne and heaps of it. Unfortunately I have to work today. Bye.