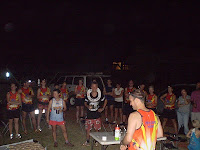 Manggala banu, biny guwal wirl buru, barrgana yarri wongai. Shit, I just remembered we didn’t do a welcome to country. A.T.? Aren’t we supposed to do that and then sing God Save the Queen or something? We could all go to hell or Port headland or somewhere for our ignorance. Speaking of the Commonwealth which I sought of was, we’re getting more athletes turn up to Hash now than the Delhi Games. 33 last night. I even noticed we had two slabs of gold in the trailer. Lets see the Aussies out do that. So Bargey and “wanta have a beer with…” who’s now called Uranus set a stellar course through and around the trendy new Six Seasons estate. A bit of everything chalk, flour, pink ribbon, broken sticks and twigs, bungarra footprints. I’m just going to slip the educational section in here which I hope doesn’t confuse you too much, well actually I don’t really care if it does, I just wrote that to try and be nice but really I’m not, well actually I probably really am nice but then it would be a bit egotistical of me to waste your time reading a blog which I’ve written about myself and just waffle on crap and then follow up with something of probably little interest to anybody, except me. Did you know that in some Aboriginal languages, the sand goanna is called Bungarra, and that the term is commonly used by non-aboriginal people in Western Australia. Wikipedia knew that! Now considering most of us are imports to WA we should start talking a bit more like the locals. I actually like bungarras, they’re kind of cute. By the way it’s pronounced like they were defective arrows used by Native American Indians. 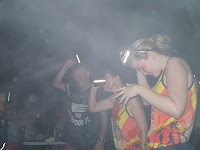 So, anyway the run was shit, did I mention that. The circle was good. Lots of people stayed for Barge Burgers and rightly so, they were good. And dessert as well. Yum Yum. Is it childish to say Yum Yum. Depends I guess, it could be a Chinese word or a place in Guangzhou province or the heroine in Gilbert and Sullivan's operetta, The Mikado. Waffling again. AT was RA again. I think he spends aeons wondering what he can get the virgins to do each week. Four girls. Ring a ring a rosy. They all fall down (down). We had a Mandurian visitor called Pisweak which I guess could be spelt Piss Week but anyway he was pretty slow on his first down down but for his second one we sloooooowwed it riiight dooowwnnn and he had no problems at all except maybe for that thing coming out his nose (see photo). 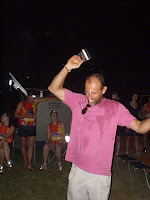 Speaking of slow, Spec was back and not leading the pack. I hope he’s okay. I didn’t recognise him at first as he had a shirt on. Namings. Always fun, unless it’s you. The crowds getting pretty tough these days, I’m glad I was named back in the milder era. The girl with the black hair was nominated as roadkill but then if you get bogged on the beach you can’t kill much, except maybe turtle eggs so she ended up with Bogger. Uranus was a big one but I cant remember why but hey who cares, its not my name and last but not least, the girl with the thing about throats and swallowing, well she somehow ended up with DeepThroat. Surprise surprise! You should choose your friends or partner carefully when they bring you along to Hash for namings, speaking of which, the dedication award of the week or actually the whole year must go to Gash who is still hashing when she’s only days away from instantly losing several kilos.
We don’t expect to see you there next week but we do expect Woodpecker to bring along the cigars.