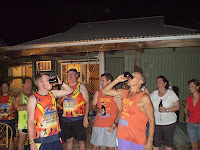 real shit. Those sprinklers on the golf course ain’t pumping out Evian. And golf courses. Is it just me or aren’t they places where you run around naked at midnight. Actually that’s probably just my memories of my youth popping in there. What ever happened to streaking? It used to be a cultural pathway in my generation. Running free. Me, Kama and Director. That thought even scares me. Move on. Anyway Monday night there was a couple of dozen of us running/walking clothed around the light industrial area, golf 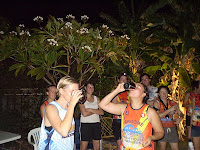 course and sewerage ponds of beautiful Broome. Kama and Cock in a Frock set the run which started off with a nicely packed bunch and ended with a big on home which left us slackers getting back one beer behind the fast guys.

AT was the RA in what was a fairly normal circle after a few biggies like Shinju and the AGPU. No one’s been naughty or in the media or wearing new shoes so it was hard to dish out the down downs. Franger and Quickie had one for something and the people 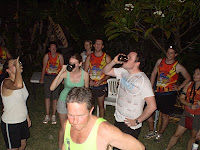 without hash shirts obviously had to have one. Crusty had one for some reason and that was about it. And Finger!

The food was a new thing with Kama organising the Cuban pizza guy with his portable pizza oven to do the Hash nosh. Not bad either. On On Bye Bye. 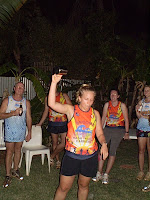 You know when you're old when you use the photoss you took to provide visual clues to who had down downs!

Is that how you know when you are old? I just thort u died when u got old and you didn't really know that you died - cos that is religion and hash doesn't do religion or gays or politics. I dont know - I forget !