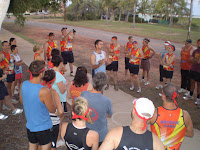 Shinju Matsuri translates into big crowd shit run. And it was. We are rapidly becoming the leading Shinju icon event. We even pulled in people from and . Fortunately those guys are more in to drinking than running so having the run ending up at a bar meant we wouldn’t lose anyone. The hares, Slowlane and Red set the run and divided up the jobs. Apparently Red was to set the shit run and Slowlane was to try and blame Red for everything that went wrong but I figure i 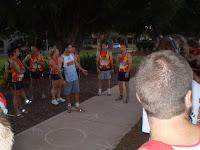 f they stop the run setting halfway through for a coffee at Kool Spot then they’re both to blame. We should have known better as we stood around and listened to Prof,Red explain his sidewalk etchings. After the confusing run around old Broome with the hares repeatedly telling us not to follow the frequently marked walkers trail we ended up back at Matso’s where things picked up. The 60 or so of us gathered in the Hash Corner of Matso’s for the largest hash circle we’ve ever had. We berated the hares and welcomed the guests. Mac the Mouth from Hamersley Hash handed out some hashish stuff and they sang their club song. We don’t have one of those but I guess we should get one. A night of alcohol indulgence with a pen and paper may be in order. Dags from and his cohorts arrived by bus and I don’t really recall seeing them on the run. Maybe they shortcutted directly from to Matso’s! They plugged their 500th Run in O 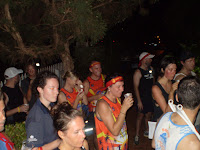 ctober up at Middle Lagoon which some of us are attending. Could be a good show. We had lots of virgins but we didn’t make them have down downs for some reason which sounded plausible at the time. While all this was happening we enjoyed a keg of Matso’s finest beer and Ginger Beer. And toiling away in the background was Director pumping out an endless supply of snags. There was more sausage and beer than I could handle and I had to head home early but a few people looked like they were looking to settle until stumps. The hash flash couldn't handle the crowds and went flat so if you have any pics? Any postings?

Middle picture narration:
Red & Slow Lane arguing and AT thinking "what the Fuck"


Red sure knows how to pull a crowd - and even get their attention. well some - unless they are standing at the back talking amongst themselves.

I particularly like dthe pictures of everyone listening to me. Though i have marked a few people down for something special for not paying attention. No wonder they got lost.

Brooke & Quickie chatting at the back - banging out the dusters.

people are generally better off not listening to you and then they DONT get lost.