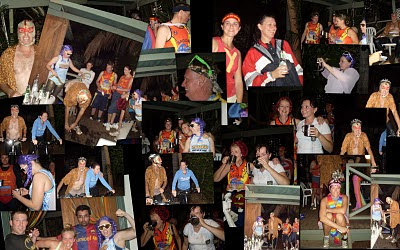 You know those weeks when you wish you had superhuman powers so you could get all the stuff done as well as all the unexpected things that suddenly pop up; well I’ve had one of those weeks. I tried the HHH Superhero night but despite my fantastic costume it didn’t give me any extra powers. Actually it just seemed like I was dressed up in silly clothes and running around like an idiot with just my normal powers. It was great to see I was not alone, in fact almost everyone made the effort to be superhero for the night. I figured a collage was the best way to do justice to the protagonists.

Pash was the hare and sent us in search of superhero cards. I thought those of us who live higher up the tree would collect multiple cards to swap at the end but alas I think that was probably just me. I’m not sure what the prize was and I didn’t see who won it. For the regular readers of this blog, I’ll give you a little tip. You should always dress up on dress up nights and wear a mask or a wig so that when you walk into places like Matso’s asking where they’re hiding the superhero cards that the staff and or patrons can’t see who you are. They can only see your side kick in the hash teeshirt and while you can tell them your hash name (or your superhero name) it really only covers anonymity not invisibility. The same goes for the walkers when the Faucenator asked the police if they needed a hand removing a couple of itinerants from the front of the police station. Fortunately they said they had things under control although they did mention they could have used me 5 minutes earlier. I must take this opportunity to thank Slang, Pash and Stealth for my fantastic attire, especially the fake floppy hairy pot belly part. The circle was a little slow to get started as the inaugural gathering of superheros was obviously side tracking the official part of the proceedings. Speaking of non superheros or maybe real life superheros, Muppet and Cockup disappeared before the circle. Naughty naughty. There was lots of down downs, a virgin, a few returnees. There were a couple of guy superheros who obviously had stowed their wallets, phones and keys down the front of their jocks and didn’t get frisked or down downed. The food as usual at the Pash house was great. Sticky noodles and meatballs.

Anyway, as I now realise I don’t really have superpowers I have to get off my ass and get on with my mere mortal life. So should you! Onon. 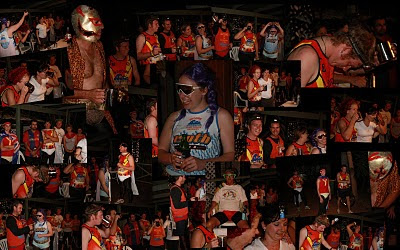