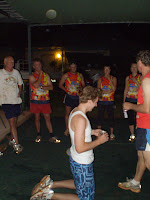 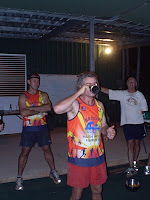 Last minute hash blog again but only because I just finished the run which was so bloody long. What a crap run. Started off okay and then I just kept taking the wrong trail and they were all sooooooooooooooooooooooooooooo long. Luckily I managed to find the on home and then caught a taxi. So, Softy I’ll have to admit you out did Two Dogs shit run from last year. Unfortunately when we got back to the trailer we had to break in so we could have a beer. I think we need to set in place a protocol for beer access after the run, 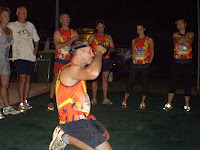 especially fluid sucking runs like that one. I don’t think we had any virgins but we had a few returnees a couple of visitors and a couple of namings. We still have a few to name this week too. Cockup was the RA and took pleasure in christening the tall lanky guy Fatso after the 5m croc whose teeth he had to swab after a recent croc attack. Hey why don’t we see if we can get croc man to join hash! Seems like a real Party guy. We also named the guy with his legs spread, Rash. Don’t know what caused the rash but I’m sure his missus can get him a cream for it. Maybe even rub it on for him? May have just been crabs he caught from the two hashers who dropped in for a run. They even displayed their crabs on their shirts. Hey, Pash, Gash and now Rash, enough with ashy names. Not sure what Swiss girl and Westpac are doing in this photo. She needs a name. The food was good, a few people stayed on for a chat which was nice. If you need a note from your mummies to hang around for a beer then just let us know and we’ll arrange i 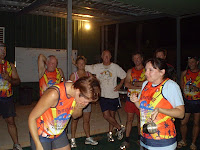