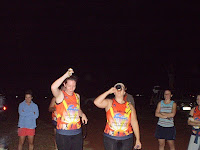 Red, you slack arse prick. Three thousand people gathered at Town Beach for your 100th run and then you wimp out. There were market stalls and food vans and hippy looking people with thingy twirlers and even the moon rose to the occasion but you scampered off into the darkness like some snowdropper after the deed. Talk about premature evacuation. Speaking of which, Stealth and Slops got the wanker song for their hard work spending hours setting an amazing run with no arrows and confusing squiggly symbol thingies. The run started off well, well, it started off late but that was cool by me as since the invention of nasal technology I don’t come early any more. 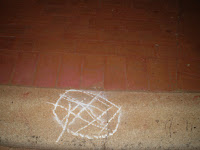 After searching half heartedly for Red, Slowlane and I went looking for the trail. I think it was somewhere around Matso’s that I found the first spot of flour and then an arrow on Kennedy hill. Fredrick Street seemed to have heaps of arrows. I must say that the hares kept the pack together well. It was orange quarters at the hospital and then off again on the arrow hunt. We got smart and decided to hang with the hares for verbal arrows but then Slops, even with the aid of a map couldn’t work out which way the trail went. In the end it was a mutiny and somewhere in the pack an on home was yelled and it was shortest route to Town Beach for all. It was then the arrows started to appear, pointing in the wrong direction but who cared, the beer was calling and the moon about to rise. Back at the trailer Red had left some note about having to rush home or to Germanus Kent to have sex with his dying grandmother or some similarly lame excuse. His name was struck from the book but he’ll get another chance 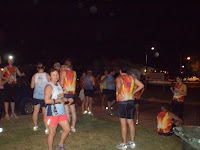 next week if shows his red face. Suppose I shouldn’t really be picking on Red all the time when I can easily pick on the hares or the virgins of which we had a couple. While I’m talking about virgins, jeez some of them can down a beer quick. One of the girl virgins was almost as quick as Funnel. We should have some sort of down off one night. Muppet you’re excluded because the beer actually has to be downed internally. It was good to see Barge back and a few others who’d been away.
Burgers, snags and onions and cake and coleslaw. 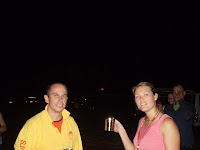 Why do people by coleslaw, no-one actually eats coleslaw do they? Nice night, good workout, everyone earned their beers and no-one got lost and we all ended up with full bellies. Thanks hares. Next week maybe a centurion. Turn up and find out!!!
Posted by faucet at 4:14 PM