If you have trouble dealing with blog loss, then please contact one of the following agencies 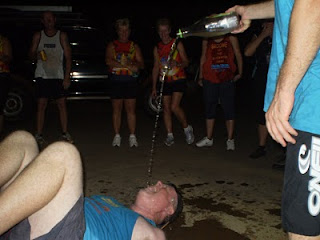 Torches most definitely
Posted by faucet at 2:08 PM No comments: 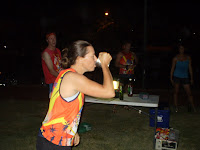 But Mousie, thou are no thy-lane,
In proving foresight may be vain:
The best laid schemes o' Mice an' Men,
Gang aft agley,
An' lea'e us nought but grief an' pain,
For promis'd joy!

Robert Burns sure knows how to write a poem. Although his works have been bastardised and often quoted out of context, before I do the same I thought I should acknowledge his original piece to bring some culture to your day. “The best laid plans of Rats and Men shall often go astray”. Well that’s what’s happened at my place. Dead Rats 6 Faucets 0

Two Dogs. Shit Run. Actually except for the bit in the middle where I got totally lost and couldn’t find anyone I actually led the pack for almost the entire run. I calculated I ran 6.5 kms Not bad fuel economy on only one beer. There was almost a tragedy on Lulfitz when the camel train of smelly dromedaries almost collided with the Hash train of 25 on on yelling weirdos who came running out of the bush. I don’t blame the camels getting scared as I got a bit of a fright too. The camel walkers were a bit pissed off but hey it was an unmarked road and you are supposed to give way to your right. So if there had have been a derailment we would have been in the right. I was googling to check if the camels were Dromedary or Bactrian as I can never remember and they had lots of interesting facts. 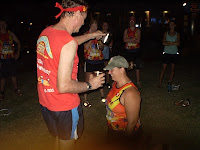 The easiest way to remember is that Dromedary starts with a capital D and if you turn that on its side and you have one hump. B on it’s side is for Bactrian which is two humps. Did you know that camels, like us, don’t store water in their humps? They actually store fat which means they can survive several months without eating. They can’t last as long without water but when they do fill up they can take on 145 litres in one session. That’s a whopping sixteen cartons. Anyway,

Slang had to rush home to get the book which cost her a down down, no virgins, a few regular returnees and a naming. One of the girls was dobbed in big time for her drunken antics and some how that morphed into a new name. So Slops it is. Cockup was the RA and christened her on the lawn outside Zanders. She then had to have another one for her media appearance during the week. AT. has been working on the down downs a bit lately and has them looking pretty dodgy. They look so bad I’m not sure whether it’s best to drink them or pour them over your head and risk external deformities. Faucet had to leave straight after the circle so missed the food. Pizza I believe. 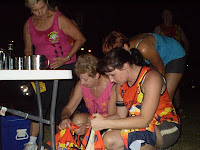 Must have had a SALE sign on the teeshirt box. Down downs for non shirt wearers, unless they are girls and wear no shirt at all.

Meet at Cable Beach, near Zanders 5:45pm for 6 depart.

Two Hares - One appears briefly and scarpers and one walks the entire thing....

After the mad mudflat hoot there were some seriously long on backs and a great loop round the back of Matsos and a cruel will smashing run up Kennedy Hill right at the end.

Where are the photos you may well ask????? Where are the electrons that the battery in the camera used to contain? may be the answer.
Posted by Red at 11:40 AM 1 comment: