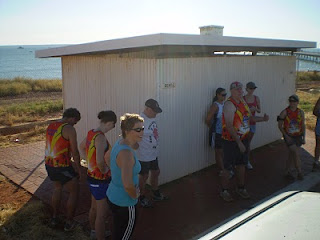 Fucking Rat. The Monday morning run was great. Took a moment to find the start but eventually located a lot of dodgy looking people hanging around the Public Toilet near the Fisheries building. At first I thought that Director had just done a really flash poster for the run but we were later to realise he wasn’t joking and it was hard bloody work. As the add clearly stated “it’s no girls blouse walk”. Fortunately I wasn’t wearing one.
You’d think that people who set runs in 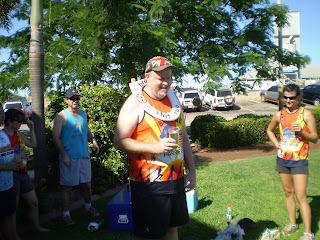 cars would be able to look at the odometer occasionally and realise that the numbers mean kilometres. Saying all that there was a bit of bush stuff involved which was nice virgin bush I’d never seen and Crackafat, the girl who owns all the land in Broome had never seen Entrance Point. The only decent ‘on back’ we saw was in the Carpark and that wasn’t meant to be found. I don’t know either? The view from the hill was pretty speckie (is that a real word?). We saw the Oceanic Viking cruise past but it didn’t come anywhere near us societal refugees as it was probably worried 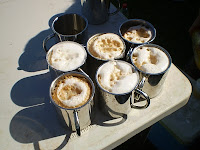 we might clamber aboard and not get off and they’re sick of that. Faucet did a spectacular roll down a sand dune suffering only minor grazing, due most likely to the beer he had prior to the run. After a slight scare the camera cranked up again. Gash walked with the lazy people, except for Quickie who has a dicky knee. The Hash halt near Gantheume was welcome before the beach trek back to the start. None of us had goggles with us so we have to take Directors word that the flour was still there under 3 metres of water.
The last of the runners got in at 9.30am. Did I mention it was a 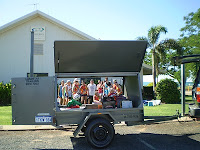 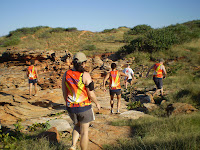 way Alpha was going to down her second one so she poured it onto her head. Probably bald now. We also had the Hash Trailer on show. It came fully loaded with mini hashers. (See photo) (Come on, squint your eyes and use your imagination here). The Brekkie as promised was superb. A traditional Australian American Mexican Anzac feast. You lazy people who slept in or went to work or were on holidays or having sex really missed out on a good feed. We must thank Fisheries for the use of their front lawn. Anyway, I have a rat to catch. Beep Beep! 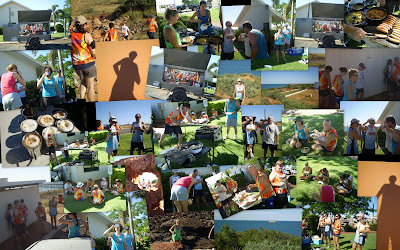