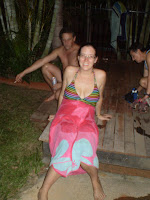 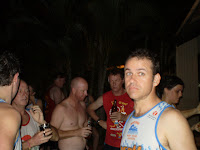 almost all the way without taking any false trails and was even back first. I know this because history is written by the winners. It was a good but short workout and the pool beckoned but there were already a few extra pool toys in the pool when we got there. Blame and Shame is alive and well on this blog. Shortctters! Quickie, Muppet and Two Dogs. The pool eventually filled up until Cockup dragged us all out for the circle. Hares first. Then poor Faucet was dragged up for some trumped up crap for training in his thongs, Come on, he should be praised. The charge degenerated in t 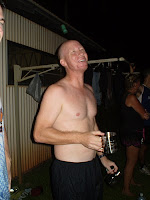 o a song for old bastards when Cockup was dragged in. The down down was so cold it is definitely appropriate to use the adjective fucking. I don’t know how people can drink them so quick without getting brain freeze. No, forget that last sentence as I just worked it out. Muppet just tipped hers out and I must say she is getting much better at it as she ages. And Red and someone just chucked theirs at each other. And Red, where are the Tee shirts? You should be a politician. You not only never answered the question but you constantly changed the subject, and what’s with the look on your face in this photo. Blondie the tri-athlete graced us with his presence, good to see you on your tri-annual run. Nice to have Slang back although she was pretty mellow. No Virgins but hamburgers and chicken burgers and ice cold Beer. 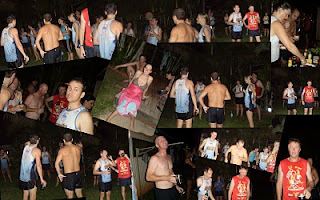