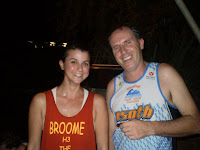 I’m tired and I have a sore leg and a sore wrist. Does anybody care? My kids don’t care, I phoned my mother but she’s not home so I thought at least there’s always the HHH suckers who read this. You mightn’t care but once you have read it you can’t unread it. It all started when I was a young child. No, not really, it started after the run on Monday night when I ended up getting lots of ambulance calls and hardly any sleep and then the next night the crew had to drop out and I ended up on duty again and we got hammered and I only got another 2 hours sleep. And then I actually had to work this week doing plumbing. I know what you’re saying, “How did you hurt your leg” 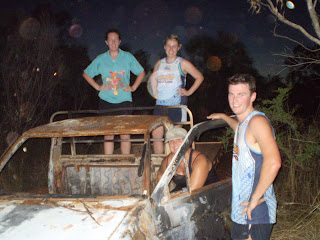 Well I did that playing soccer on Wednesday night. “But what about your wrist?” No, it wasn’t what you are suggesting it was also a soccer injury. Actually now I’ve had a whinge I feel much better. Thanks for your support.
I guess I should also write about the run. Fantastic run. Great Hares. Not too long or too short. Lots of long on backs. Lots of stunned hashers walking around in circles, too scared to wander off by themselves in dodgy streets, or at least waiting around until someone actually found the right trail as they’d taken too many wrong ones and no longer trusted Yamashitta or Faucet to hint which was the right way. Phew. Long sentence! Nice bushy parts with a burnt out car body for the kids to play on. See photo. I have forwarded this photo to the police and you guys will probably get a call soon. Back at Yama’s there was a nice pool, cold beers and the circle. Slowlane dragged the famous four, Yama, Quickie, Wespac and Faucet into the pool for down downs. Amazing how many celebrities we have in Hash. 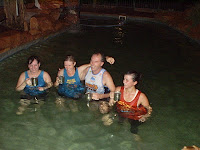 Pyjama pants boy had to have a down down as it was his last run with us. Apparently he’s a bit of a Hash Slut and has been through a few Hash’s as opposed to having been through a few Hashers which would make him just a manslut (According to my daughters that’s what you call studs these days).
Slow also had to have down down for being a passport virgin. We don’t have passport virgin song so we just sang the regular virgin song instead. Speaking of which, we seemed to have morphed that into a decent song by eliminating the last line and going straight into the down down down bit. We used it earlier on some poor hapless virgin who ran with a camel pack and a couple of litres of water. If she wasn’t scared off and comes back with the pack next week she might end up being named early. We should have a naming next week with the “hardcore” triathlon girl needing a “hardcore” name. Any suggestions?? And the dog. He didn’t get a down down but jumped in the pool each time just in case. And Funnel forgot to turn on her thingy so I can’t tell you exactly how far we ran. 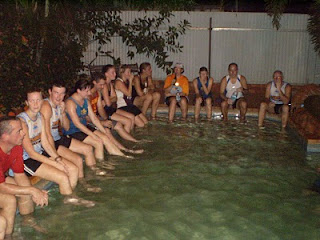 The food was great. Hamburgers and salad and a nice potato salad on the side.
Next week Quickies out at Cable Beach. Should be great. And Red you slack arse. Do runs I help set scare you? You always seem to miss them???
Off for a nana nap. bye. 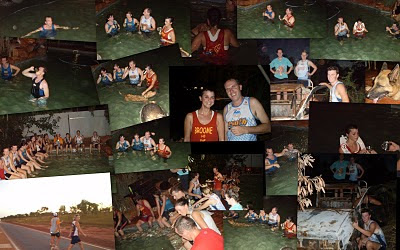 I think the Tri queen could be called Iron Lady