What happens when you let Yamashita and Tacklebox set a run? Bring out the Shit Run Toilet seat. Actually I thought it was a good run as Red always seemed to take all the false trails. Even when he gave up and stood by the big boab and waited for some other sucker to find the wrong trail, he ended up following a group headed in the wrong direction. Sucker! Talking of non suckers, poor Slang and Faucet found a trip wire and ended up with horrendous wounds. Maybe horrendous is a bit over the top but it’s a word I haven’t used yet in the blog and that seems a shame. Speaking of Faucet I have to say some nice things about him this week as not only is it his Big Birthday this week but one of the Hashers mentioned to him that he gets a hard time on the blog. Sorry Faucet. Idiot! Not me. Her! 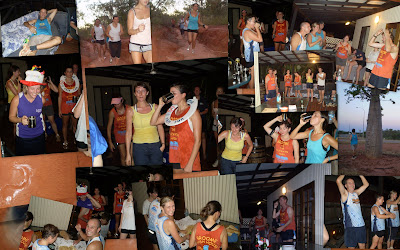 The run was long but short little blond ex virgin girl had her iphone and said we ran 5.38km. Bullshit. It was obviously longer for those of us with longer legs. At one stage a few of us were lost and we saw Tacklebox in the distance who said “Ahh hock mar durndoo”, then pointed and disappeared. Who knows what that was about? After the Blue Haze tour I think somehow the whole 26 of us ended up back at Muppets. Cockup was the Religious Advisor for the evening and dragged up a few worthy down downers. Perky was up there again for her picture in the paper as were a few others and come to mention it Cockup should have been having one himself.
It was the short little blond ex virgins birthday. I think she’s in for a naming next week as it’s to hard to keep calling her by her current name. That girl can down a beer! I think she only comes along to show off. Pash was late with some dodgy sore ankle story. Barge made it to 80. The Muppet Cockup and Red Trio all now in the low 90’s. While we were waiting for the food, Cockup led the newbies through Swing Low. Tears to my eyes. The food. Muppet didn’t hold back. Copious amounts of bâtons de poisson, served with frites et pâtés and croûte de partie.
I love Bablefish. Makes shit sound fantastic.
Party. Faucet. Sunday Arvo/evening. Come along, meet people with normal names drink free beer and yes Perky I think there’s sasuage rolls. Bed time. Bye.
Posted by faucet at 10:53 PM

at least muppet has moved on from sausages and 3 types of sauce. the culinary delights just keep on coming...........

the food was out of the cardboard box - or did the box taste the same as the ingredients.

missing you all ;-( don't tell me i'm missing more parties. i'm always away when the good parties are on.