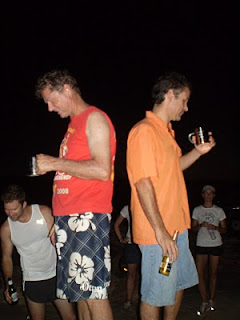 Tell me. Does this photo look like the hares are saying “I hope they haven’t pissed in our down downs because we set such a shit run” and so they should. On a course more suited to a colony of amphibious rock wallabies it was a wonder we all made it back unscathed. Especially when you add in the distractions of the fantastic sunset and the full moon rising over the dunes. You could say it was a hard course but only because it was made of rock. Short blonde ex virgin girl was complaining it was difficult to traverse the terrain with such short legs while Stealth on the other end of the scale leapt from rock to rock with the airs and graces of a giraffe. Probably a good time to point out that our public liability is based on the principle that if you are stupid enough to voluntarily turn up to Hash then you are the liability, not Hash, and so we don’t need any. Speaking of stupid look at these idiots in the photo. One full moon and they’re werewolves. They hadn’t even had a drink yet. Cockup had the rescue vehicle at the lighthouse car park to ferry the wounded back to the circle but the fit mob that we are all opted for the run home option. Even Director. It was a funny circle as there were only about 20 of us and we are more used to mid thirties these days. 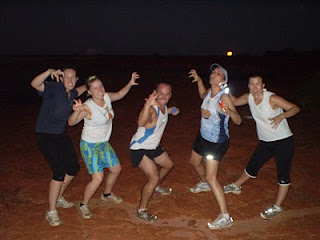 Lots of people had good excuses. I saw Halfarsed in town surgically attached to some bird. Obviously he thinks sex is more fun than Hash. Pause. Continue. Analtool phoned Faucet an hour before the run to say he and Westpac wouldn’t be coming and could he pick up the Hash Cash on the way. Or at least that was what the slurred garbled message sounded like. Muppet, Porno and Fishfingers, Barge and a few others were outta town. Faucet ended up the Default RA again. No Virgins. The quote of the night came from one of the newbies. Alice Springs, that’s somewhere in the middle of isn’t it? Lovely girl but needs to get out more. Too late for a down down though. In true Broome Hash tradition no-one had a birthday. Well I’ve got one coming up and you are all welcome. I put it on the Blog. Perky took a down down for having her photo in the paper without her Hash name and Two Dogs had one for being absent for so long.

Porno’s Bitch did a great job with the beer but unfortunately the esky was still nearly as full when it went back in the car at the end of the night. Well not really the end of the night it was pretty early. I worry about the youth of today. They just don’t know how to empty an esky on a Monday night. 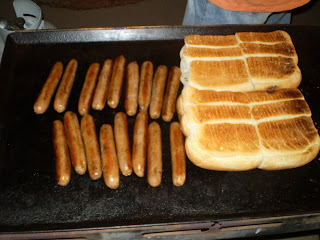 Well the picture says it all. This is what happens when you let two blokes who have never been exposed to phthalates organise the meal. Opps. Next week is at Muppets. Could be the same! Except Muppet adds salad and maybe a bread of grainy origon. That’s the difference. Come along. Find out! She likes to prove me wrong.

This last part is for the more cultured hash members and so the rest of you can get back to work now. I just read that Gantheaume point was named by the French as an eternal way of making fun of english speaking people who are new to Broome. As we all know after several years it becomes quite easy to say. Now that you can say it do you know who Vice Admiral Joseph Antoine Comte Gantheaume was. No. me either, and as they say in “qui donne une merde”. Sad. I’m laughing at my own joke. Time to leave. 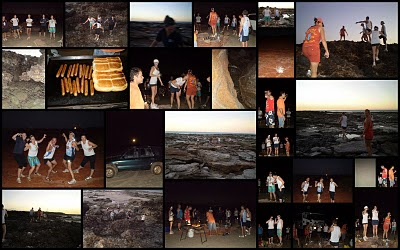