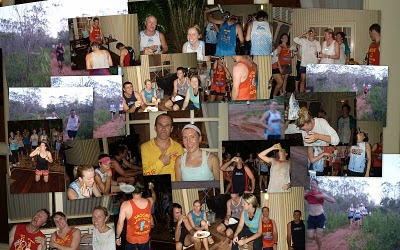 Hey, how cool is this collage? Cockup showing his little titties in the bottom corner. Who are those girls chasing him? I've managed to stick a run 161 slideshow to the left. Click on it for bigger photos. Anyway the trash is as follows, 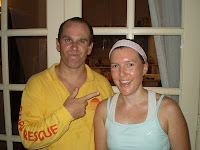 actually great virgin run as they managed to suck in lots of the older hashers into their many on backs. Even the . Put your hand up if you were one of those losers. You can put it down again now. The hares were Perky and Buttabitch or Butter-Bitch or what ever way you spell your name, actually probably the latter hyphenated double barrel one as you live in . Long run, poor old Cockup on his first run for a while pulled up a bit lame and short-cutted home. I like a good run and with almost another 30 people turning up so must the rest of you. Cockup was saying we’re a pretty young Hash group compared to others he’s been involved with. I’m young, just trapped in an aging body. Mr Tool was the RA again after a pitifully unsuccessful attempt to pawn it off to someone else. 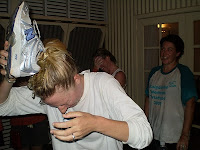 He does a good job so he could be stuck with it. We only had two virgins and one of them was made to drink a beer out of her new shoe. I thought that was a bit rough on the first night when she didn’t know the rules but then hey, what rules, we don’t have any. We had two shoe drinkers and then 3 namings. The man who works at the wood place got called Woodpecker. I’m making an assumption here because he dobbed his other half in for a name, Gash which had to do with a gash on the other end of her leg (from a previous run). I think a few girls I know would chop it off for that and he’d need to make himself a wooden pecker. If that doesn’t make sense then bad luck, it’s late and it made sense to me as I wrote it. And last but not least. Bubbles. What a great Hash name. That what happens when you fart in the spa or at least sit in it all night and get covered in your namesake. As usual I can’t remember what the other charges were for. 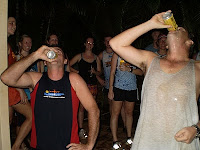 Doesn’t matter anyway. The food. Well. Pizza. Can’t really comment on that can I, but probably a good time to mention to those of you contemplating setting a run. You don’t have to provide a meal after the run if you don’t want to but it is a nice social thing. Pizza is easy as you can just count how many turn up and ring through the order so it’s there when we get back. Some people are good cooks or good organisers or even good con artists and get someone else to do it for them and we end up with amazing meals. Either way just see Westpac and she’ll fix you up for the cost of the meal. We try and keep it around the $5.00 a head. And just to finish off with something interesting to make it all worthwhile. Did you know, I’m guessing you didn’t, unless you read this blog or are some sort of weirdo who spends too much time 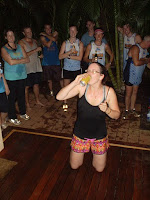 reading crap on the net, that Americans eat 350 slices of Pizza a second which equates to about 100 acres a day. That must be a combined total and not per person otherwise they’d be really fat and have to spend all day eating….

nice display - very mod. you are really moving with the times or you have too much time on your hands to play around or you have really smart people helping you.

who is anonymous. and who has made a baby hash. so much gos. spec

As the author of the previous comment was anon. then it doesn't narrow it down at all. I did see Cock-Up and Faucet going at each end of the esky, there may have been some transference but surely it'd be too soon to tell.

I reckon it's Slow Lane. He's the only person I know with a baby - still I'm sure the kid will get in more runs then he has lately...

well it can't be the virgins and it has to be a girl and possibly one that has a partner, but not necessarily, umm I think there will be a bit of tummy inspecting next Monday.

Does that mean it will be a topless run?

midriffs / boobtubes for the shy

Looked carefully at most of the Guts running around Monday. It didn't narrow it down. Bees Knees looks the most pregnant now that Snob has stopped showing up.

I find most of them start to expand after a few beers. Especially if they are made to do a few down downs. Maybe that is why slow lane keeps throwing his away?