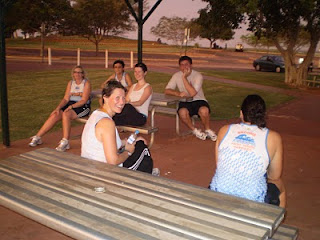 Just realised, Mondays run was the first run for the decade. What an auspicious run for a virgin Hare. The girl whose identity can’t be mentioned as she is yet to be named set a great run in spite of having to deal with her co hare Faucet’s self perpetuated reputation of legendary run setting. Many discovered all the false trails which made it a long run but with those Chrissy kilos to loose it was all good. The Hash Halt was probably her only downfall, no beer or icy pole thingies. The turnout was great with about 19 turning up and most staying for a feed. A great 3 course meal, as long as you count the beer as one of the courses. Great food, fancy beer, we’re turning into some sort of flash elusive restaurant. Back at the circle Faucet ended up Religious Adviser again. Don’t know where Red is, had a baby (well done) so he was using that as an excuse not to be there. I think we need a spare RA. Either Slang or Arseabout would make great female options. A few names were bandied around for the new people, Butter Bitch sounded good as did Run Off for the hare as she ran off to tend the stove during her hare down down. That’s bad. I don’t even have a photo of her downing for the blog. We had a birthday, sorry forgot whose. It’s been a week and old people forget stuff especially old people who drank too much when they were young people. We also loose Spec this week as he heads back to . Probably send his gear off on the truck and run down. Time to get some shirts for new people so we can all look the same. Muppet sent out an email with stuff on it. That’s about it really. Almost fogot to mention Slangs progress on Australian slang. She said she has learned the expression "hard as a fishes asshole" which brought a few blank stares until someone replied it's actually tight, not hard. That brought the house down. I’m on holidays over on the Gold Coast and even slacker than when I’m at home I’m actually still in bed, naked, writing this. 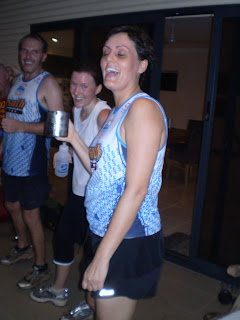 Pretty sad really. I’m off to next week so I might see if I can run with the Mother Hash in KL. I think I read it’s run number 3445. I was googling to find out something intelligent to say about the Gold Coast and discovered this gem. 20,000 worms will consume a kilogram of organic waste a day and even more if the waste is pulped finely. That means it would only take 1.5 million worms to devour me in a day. Wow!