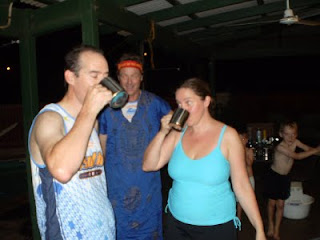 The woman that lives next to me is a dickhead. Yet another virgin run. How nice. I remember my first time in the back of my Cortina. Sorry, having trouble focusing today. Talking of saying sorry as English people often do, last weeks run was set by Mr and Mrs Tug. Tug was full of apologies as we ran around Cable Beach looking for marks that had just disappeared. At first I thought they had just drawn arrows in the sand with a stick and the wind blew them away, but no, I did find a couple of tiny remnants of flour on one of the dunes. My guess is that as Mr Tug was dropping the flour Mrs Tug was running behind collecting it up again to use in the yummy desert she made. We had a nice run up over the dunes along the beach and back over the dunes on a different path. It’s always so nice when you get up on top of the dunes and look out over Broome. 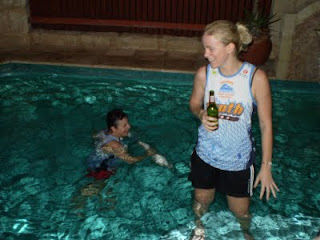 The trail through 6 seasons was a bit dodgy. Tug didn’t even seem to know where it was supposed to go. I’m thinking now that maybe he gave the kids five bucks and got them to set it. Anyway, there was a Hash Halt and we found that or it found us and we were able to refuel. Except the walkers. I trumpeted but to no avail, they didn’t show up. So we headed off and after losing the arrows again we reverted to our sheep mentality and just followed the person in front, or beside or even behind and had a nice workout back to the Tug house. A couple of the girls went for a dip in the pool and that childish Barge woman squirted Faucet in the crutch with the kid’s water pistol. The circle was led by Cockup for what may be his last run up here for a couple of months. We had four virgins. I always feel like I’m writing something naughty when I write virgin. Virgin. Virgin. Virgin. I don’t understand why as I don’t feel anything when I write Qantas. I can’t remember what people were charged for, not even me. I do know that bitch Fish Fingers with the down down enforcer cup poured ice water on my head even 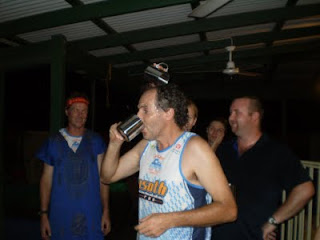 before the chant was half way through. If anyone ever remembers any significant down down charges then just post them on the comment page of the relevant blog. And thankyou to those who do post comments as I enjoy reading crap as well as writing it. The food was great. I think everyone had seconds except for the Tug family who would have had to have thirds and fourths and food all week. Hash is definitely worth it just for the food lately. The evening ended for me when I left, which would be pretty obvious. I couldn’t stay any longer listening to Cockup strumming the guitar although the tug children seemed in awe of his skill. So final critique. Good shit run for first time tuggers. Always good to have new people set runs as it adds variety and new ideas.
Now remember it’s Xmas time and we all drink too much and eat too much and get fat so it’s extremely important to come along to Hash this time of year and do some running and wobble off a few grams of fat. Next week at Captains should be great. Really nice location, almost as nice as my place. Turnip. 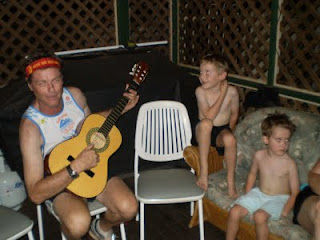 Oh Shit I almost forgot something educational (except for the first sentence). Tasmania is the southern most state of Australia.
Posted by faucet at 9:03 AM