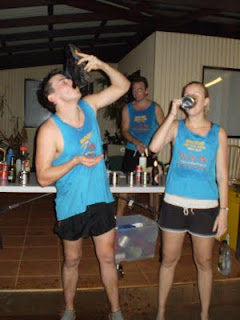 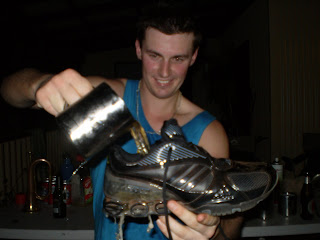 There were only a few down downs and much to the disappointment of Arseabout no one needed to be enforced. Slang brought a new song to the group. Well she obviously stole it from somewhere but it was simple, stupid, totally irrelevant, had naughty words and easy to remember, so I’ll go out on a limb here and say it will become a popular song for Broome Hash circles from now on. "Meat pies, peas and gravy, you are fucking crazy, la la la bump, la la la bump. Meat pies, peas and lentil, you are fucking mental, la la la bump, la la la bump." Sounds better with alcohol. Hey, while I’m out on a limb I think if you don’t have a Hash name and you start talking about fish fingers and then go on and on and on about them, while people around you are pissing themselves laughing so much those little knobby bits on the back of their heads behind their ears hurt, then, you’re probably be getting a Hash name next week.
Changing the subject to food. There was enough Mexican to feed a rural village in Chiapas. (the southern most state of Mexico) I think the chilli’s might have killed a few people though. You people that ate them. What do your internal organs think of you? Do you eat then so you can have runs during the week? The rest of the food was great though. Shrink bought heaps of beer. Remember next week, Chiapas is the southern most state of Mexico. 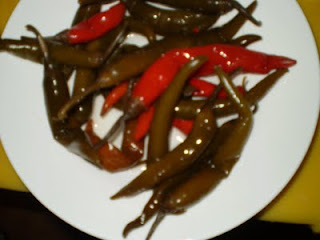