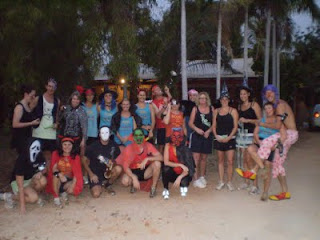 To err is to be human, to aarrrghh is to be pirate but I’m not sure what to say about “Pirate Director”. I could start with his name Pirate Director. It just doesn’t cut it. Peter Pan had Captain Hook. That sounds cool. Maybe Captain Director. Nuh. That doesn’t work either. Well at least he looked the part, and he was definitely able to rustle up a motley crew for a Halloween Run around Cable beach and . Looking like a weather beaten Jonny Depp, Director read out the rules for the run. “This arrow means this and the one with the A doesn’t mean that and the squiggly face thingy……”. He had a list as long as your arm, in fact that reminds me, he only had one arm. The last crew probably chopped it off because his last list was so FUCKING long. Unfortunately I don’t have a photo to compliment the text. The first people to get lost were understandably the two clowns. 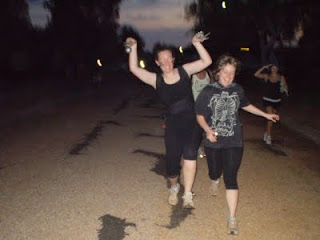 The guy in the clown suit and Barge. Is it sad to laugh at your own jokes? Do you know why cannibals don’t eat clowns? They leave a funny taste in your mouth. Anyway the fact we were lost at the start was handy for the Shelia dressed up as a bride who even turned up later than me. She looked the part running down the street chased by a bunch of deviates (that’s the weird type not the intransitive verb). That’s an intellectual joke. I’m trying hard to appeal to everyone. I’m not drunk, I have all this crap running around in my head, but it is nearly time for a beer. Sorry, back to the run. I had to laugh when the cops stumbled across us near Janaburru. They slowed down near some random guy drinking a beer who wasn’t even with us and then we all started coming up out of the drain and they thought better of it and drove off. In a flash we were gone too and running through the bush……OOOOOOhhhhhh. Director and his assistants had worked hard to make the dark trails even scarier. 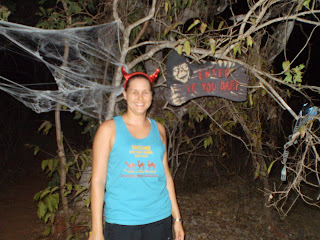 Webs and weirdos with jack-o-lanterns, signs and hanging ghosts. Arseabout was looking a bit horny as she posed for the camera. Faucet was having fun scaring the stragglers. Sometimes he even put his white mask on. Now its confession time. About ten of us stragglers missed the turn off to the Graveyard and took the somewhat safer high road. Maybe we missed the balloons! Sad really, as I heard it was great. We were warned not to short cut, it was instruction number 39 at the start of the run. None the less we saw some of the tombstones scattered around Directors backyard later on and even though the famous Kamakazie wasn’t able to make the run he was there in spirit.

The circle was led by Cockup who broke in his new shoe with a down down, it was sort of like he couldn’t wait to do it. A bit weird really. But then he wasn’t alone on that night. We had a couple of weirdos from and a couple of local weirdos who thought their own faces were a good enough costume for a Halloween Bash. Red and Barge (who likes short walks on ). You still don’t get it do you? We also said goodbye to Stealth. Good riddance, Splitter. 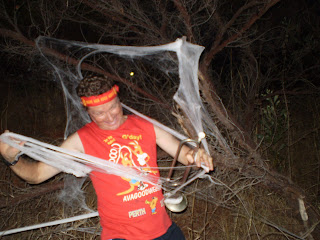 Cockup also led the masses into the perfectly choreographed version of the classic “swing low” followed up by some childish thing about knees together, legs together. I guess with some work and improvements like knees apart, legs apart, it could have more potential. While Director had also put a lot of effort into his backyard, Mrs Director, (I guess) had been slaving away in the Galley. A fine spread she put on to. A bowl of veins which I’m guessing was really red spaghetti. I checked with her later and she explained she actually cut herself with a knife when she was putting the spaghetti into the dish. But it looked so good she left it. Don’t gag, I was only joking, I do that. I think. It was good to see Muppet back on her feet but not sure what she and Pink Bits were doing to the pelvic region on the skeleton hanging on the clothes line. After the feed most people disappeared, 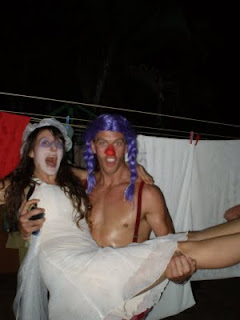 A great picture of the happy couple - she got picked up by her man after running around the streets of broome - there is a shortage you know !!

faucet - you forgot to mention the singlets and the fact that Red rigged the vote and now we just have to have what he wants - der... how unusual!!

muppet, cockup & faucet - always putting in the hard yards to make the esky lighter to carry on home - such dedication to the cause !! a commendable effort!!