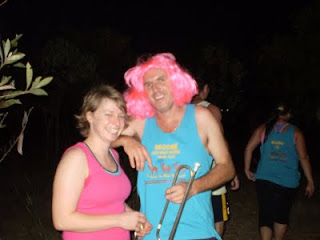 I was supposed to be the glamour girl for the night. I wore my best pink hair and was doing well then you come along and bang, hit the ground and suddenly you’re Miss Popular. Everyone wants to know how you are? All the boys want to carry YOU through Minyirr park. Then when down down time come along, Miss Went Down Down was nowhere to be seen. Some concerned hasher suggested we could all run up to the hospital and put your down down into an I.V. Well stuff you. You even stole the first part of my blog. That’s it. No more about you.

Well, what a run. Wombat, her hung over housemate and Red pulled a good crowd for a pink themed run around BP Reid Road Views Estate, Old Januburu and the Minyirr Dunes. Long on backs, the Red influence I’m guessing. On one of the first ones it ended up just me and Quickie standing on the corner of . I was cleverly disguised with pink hair and a trumpet but Quickie was easily distinguishable to passing traffic so we decided even if it was on, we weren’t going it alone so we headed west and looked for safety in numbers. It wasn’t hard to find everyone as they were all just wandering around like a bunch of pink sheep, except for Barge who looked like an orange. Once we finally worked out the hi-tec pink blue ribbon system we got running again. Over the road and up the big dune and surprise surprise an on back. Somewhere deep in the bush some of the hashers learned that we have a couple of ambo’s, a doctor and a few other hospital people when we go on each run. It’s great how hash hides your true identity. 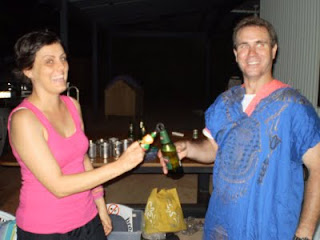 After we disposed of Princess Muppet we all sort of headed towards home and ended up at a hash halt that had no booze. Apparently the hash halt booze delivery vehicle was at the hospital, so we just headed back from whence we came. The circle was still big despite a couple of people being tied up. A.Tool was thrown in as the Religious advisor for the evening and one of his first down down recipients looked like she might have needed to join Muppet for the night. The down downs were pretty cold and Wombat had that look on her face that said the down down was ready to come back as an up up. At least it would have been a bit warmer. We had a threesome of virgins who opted for a half down down and a cold beer shower. Our returnee Slang came bearing gifts from distant lands. A quirky little leprechaun bottle opener. An official presentation was made and celebrated by all. The Sibisado girls put on a fine spread considering they probably did it by torch light as they weren’t sure how to turn the lights on, or was it just the one in the carport. You have to wonder if they thought the light operated by a motion sensor and how long they spent jumping around in front of it trying to turn it on. I know you’re smiling because you did didn’t you. And last but not least, little Lessy took in all the proceedings as she sucked on a beer, pondering , no doubt, what life was all about. It brought on a smile. 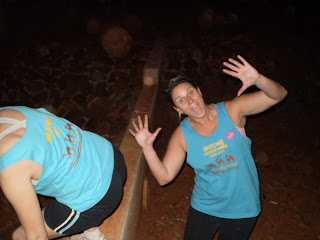 And yes one more thing, there’s always some idiot who wants their photo on the blog. And this picture reminds me, don’t forget to come next week because it’s Directors Halloween night. Better bring some clean undies if you get a bit scared as you never know you might end up having to go to hospital. (some advice my mother passed on to me)