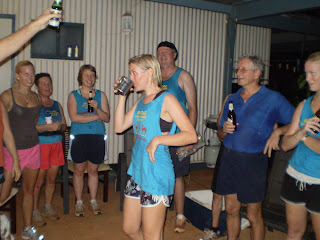 The crowds just keep getting bigger or maybe it was the lure of a Quickie run that had the numbers up. It was a good run through some of the lesser known drains of Roebuck Estate. It did have one new innovative element, a run through the middle of Shrink’s new house, which won’t be ready by Xmas but like all Roebuck runs it ended up going through the Primary school where the kids rub out the marks. The sprinklers in some of the parks also took out some of the arrows but fortunately Quickie as her name suggests was able to keep up with the leaders and head them in the rightish direction where needed. Don’t think she lost anyone either. Specs got a stitch or in his case that may be a suture. Although it was a quick run we all worked up a good sweat. The wet season is coming, bring it on. Talking of sweating, wet Tee shirts and semi naked bodies, a couple of the young boys, Specs and a guy with no name, couldn’t wait to flash their bods at the circle. The sight of semi naked men caused Slow Lane to burst into song with his own rendition of the Joe Cocker classic “you can leave you shirt on”. I’ve got photos of you sleezy women hashers drooling as the topless boys dribbled their down downs down their unpotbellied fronts. 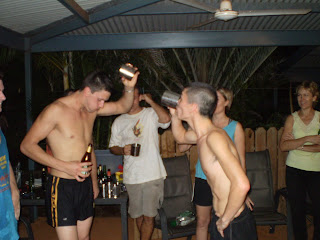 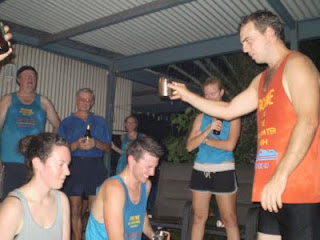 . I will go to Muppet who’s gone to Bali for a root. Well maybe that’s not why she went but if she’s going to take on me then she’s not coming out unscathed. (you need to read previous blogs if this doesn’t make sense). Last but not least, the appraisal of the cuisine. Chicken kebabs with a nice salad and plenty for all. I won’t mention the beer. Shrink.
And don't forget, next week, wear something pink. On the outside.
Posted by faucet at 8:28 AM

Shrink has two down downs to go now..no beer and new shoes which she didnt declare!! See you next week in your pink bits.

what happens in bali stays in bali - unlike yourself fawcett who couldn't control the distribution of the news.

apart from that - a bloody good blog !! almost makes it worth turning the computer on!