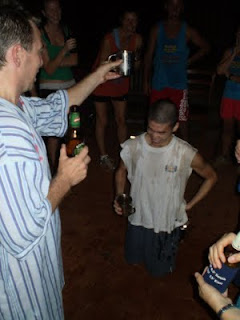 Yet another good turnout of 20 plus runners to search for the trail set by Arseabout, which was a bit of a tour through some of the more seedy parts of Cable Beach. Around the back of Ocean Lodge, a bit of hanging around the cemeteries, (no dolphin jokes) then play 'run across Port Drive’ a couple of times. I noticed not everybody waited on the side of the road and “looked to the left, looked to the right and looked to the left again’ before walking safely across the road. It’s a very dangerous road and you should be more careful. A few people got lost in drains and not sure what happened but I think it was Red who was yelling out about snagging his petticoat when he took a false drain trail. A couple of us got lost around BP Reid road but managed to find the pack again, even though they didn’t have a horn. Where is the HORN? That must be about 3 hornless runs now. I have a horn; maybe I could bring it next week and show everybody. It’s quite a long one though and would be difficult to run with. It's true!
This week I discovered why they call Barge, Barge, as I watched her barge through a couple of people on Port Drive. She chased down Halfarsed after he brushed passed her. The circle was led by Slow Lane again. We had a couple of Virgins as usual, then an octogenarian down down for Red. 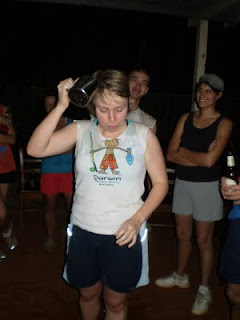 We also had 3 namings with Rubber having to get down on his knees in front of the man in the stripped nightie. Spec also got a beer christening and finally the girl with no name, got one. Well done Hash Pash. The food as usual was good. Lasagne and salad. The best $5.00 feed in town. No shopping, No prep, No dishes. What a deal. Wish I could bring my kids along. Opps I should say no work for everyone except the people who had to do it on the night. Thanks Maestro and Arseabout. Good to see the beer supplier and the beer supply girl are back in good form. Forgot to mention that last week. That’s it for this week as I have to go back to my real life now. On On.
Posted by faucet at 10:24 AM