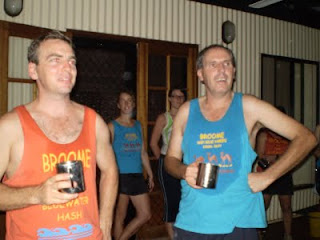 Well I’m really slack this week and trying to post the last run blog just before I head out on the next one.

The critique. Muppet the Matriarch set the run. She was supposed to do it with “the girl who still doesn’t have a name yet” but she never turned up but got a down down for it after the run. It was a good turnout with over 20 people. I’m not sure if tonight’s run will have so many runners as Muppet lost 13 of them. Last time I saw them they were hanging around out on the highway near Blue Haze. Lots of on backs and plenty of time for the walkers to catch up. I’m sure the people who live in Roey Estate think we are a bunch of wankers who wander aimlessly around . Luckily we’re in this time. I’d had a good workout up to the Sanderling arrow hunt so about then Shrink and I sneaked off back to Muppets to get the beer drinking started.

Due to the absence of Cockup, was the religious advisor for the night. Did a great job except when he tossed an ice water over me. I can’t even remember what I had done to get a down down. We had a couple of virgins again, which is always nice. Muppet put on sausages yet again which was fine by me as they are one of my favourite foods. That’s pretty sad isn’t it! Obviously Muppet likes a good sausage herself. The photos are pretty lean this week as I forgot to bring out the camera until the end.

Looking forward to tonight’s run. ON ON

you forgot to mention the 3 types of sauce - it makes all the difference, not to mention the bread rolls left over from shinju run, and a freshly tossed green salad made by no name - now known as HASH PASH!~!
and just for you faucet - it will be f****** sausages every time at my house - and I am cutting the sauces down to one!! so there

SALE !! SALE !!- HASH SINGLETS CLEARING OUT SALE - ALL STOCK MUST GO - BUY THEM FOR CHRISTMAS, MOTHER-IN LAW'S BIRTHDAY, MAKES GREAT GIFTS FOR CHRISTENINGS AND WEDDINGS - MATCHING HIS & HERS ARE AVAIALBLE. 2 FOR $15 or $10 EACH !!