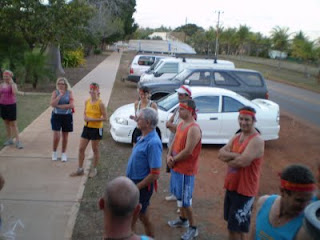 Probably a bit clichéd if I call this weeks “Shinju Run” a pearler of a run because I’m the only one who’d find that funny and it would be too hard to explain it to the majority of you. What a great run, over 50 people turned up to follow Cockup and Faucet’s trail through old Broome. We started from Bedford Park where we all got our cool Shinju edition, Director inspired, collectors item, headbands. Some people put their head bands on their arms but I won't make any jokes about that. Cockup welcomed all the new people and told them how it all worked, except for the bit about the flour trails. We headed off past the Mecure for the first of many ‘on backs’. I was pretty proud of the Anne street ‘on back’ which was one I set. It was long and combined the use of chalk and flour as well as a 90 degree arrow. I’m guessing the new runners found it pretty exciting but they seemed to contain it well. A couple of the fast runners, I think it was Slow Lane and Pram Boy got way ahead of the pack and eventually lost the trail at a devious ‘check’ on Fredrick Street. 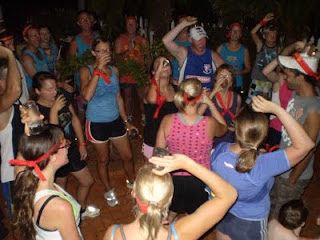 The real trail went straight on along the side of the drain and around the last resort, through Macca’s takeaway (which was my first time and no were near as exciting as I expected), across the Visitor Centre veranda again like last week, through Chinatown, up Kennedy Hill with a mean ‘on back’ (which a few losers ignored), then back down the hill past the police station and courthouse for the ‘on home’ to Bedford Park. Word is suggesting I fragment the last sentence but I’m not going to. I’m a rebel.
The circle and food were carried out in the front yard of Matsos. What a venue. We had our own audience of customers who’d reserved or queued up for vantage points to watch us from the veranda where they had paid for their food and drink while we cooked a barbie and drank free piss. The circle was huge but not really a circle as the Matsos courtyard is in fact a sort of triangle and some people had trouble with that. I’m guessing they also struggled with trigonometry at school. In the circle I think we must have had the largest congregation of virgins that Matsos has ever seen. I called it an orgy of virgins but some one pointed out it’s probably a vestal of virgins. Orgy sounded better. The virgins did well with their down downs and I guess it was make or break for some of them, by this stage they must have figured out Hash is not for them or thought it was really cool. I guess we find out next week. 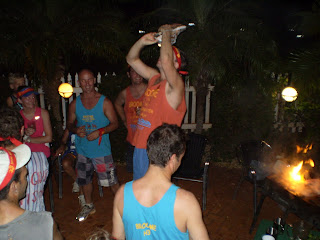 Slow Lane the dickhead or maybe the martyr wore new shoes. Little did the patrons of Matsos know who employed the idiot they watched standing on a chair drinking beer from his shoe. Someone made a comment about drugs but of course Hash does not condone the use of drugs or any other form of performance enhancing substances. Speaking of that, the food was great, Director had worked hard getting it organised and even thought about the vego’s and the kids. What a kind man. A few of the other Hashers chipped in with the serving of the food on the night. I’d like to thank anyone else who was involved but I don’t know who you are or forgot, but thankyou all the same. By the end of the night I was starting to forget a few things, like, I don’t usually drink much. It was too late when I discovered that the yummy “Sows Ear” I was drinking was 8%. It was nice to sit around and chat with the stragglers and make sure all the beer was gone. I will eventually work out how to stick all the photos onto the slideshow and you can check yourself out and see I wasn’t the only one doing silly things at the end of the evening. It was a great night and was also good to see some of the oldies turn up for the run. Hope to see some of you virgins come back for seconds. ON ON 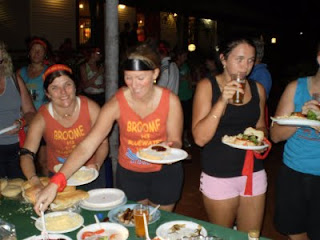