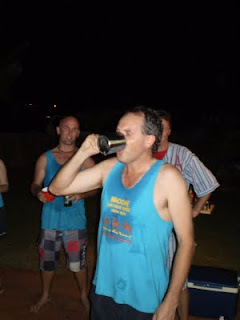 Well as long as you knew where AT and Westpac live then you would have been able to find the start of this weeks run. Sort of a dodgy run. Hung around the primary school for a while looking for marks in chalk that the kids probably rubbed out. Then off through the scrub following the join the flour dots until we saw the light. It was a big red one. Discovered where lots of the illegal backpackers camp and where they go to the toilet!!!!. Down along the airport road and then a long on Home. Just to show there’s no editorial censorship in the Trash I was made to do a down down for going to Bali and getting a root. Last time I tell Cockup anything. Another girl, who’s name escapes me at the moment admitted to being on a self imposed snogging ban for one month, which raised a few questions. Half-arsed and Slang sneaked off together after the meal. Mmmm what sort of people do we have in Hash?
The down downs went well, without a drop being spilt and shit they were cold. One virgin and a couple of returnees. Muppet gave Cockup a cool down with a mug of chilled water. Not sure what for but he probably deserved it. Good to see Maestro back even if it was only for a cheap feed. Speaking of food. Great fried rice. If you weren’t there then you missed out. Actually there was so much of it you could probably still call in and have some now. A few stragglers stayed on until only the Peroni’s were left and then called it a night. On On til Monday. 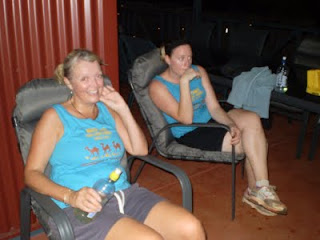 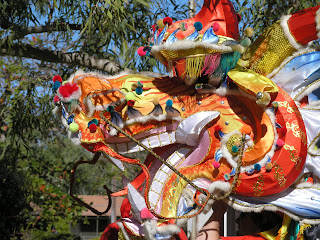 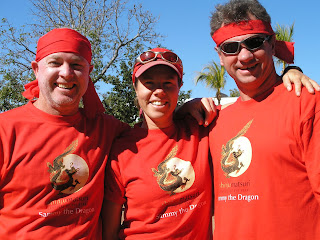 Photos: Sammy on the loose, above. Hashers Conchie, Two Dogs and Viagra ready to Leg it for Sammy in 2008 Shinju Float Parade.

It has become a new Broome tradition that BH3 helps Sammy the Dragon during Shinju Matsuri (Festival of the Pearl). Basically you become a Leg and run around creating fabulous Shinju magic in the giant Chinese dragon called Sammy.
Leg training is Tuesdays & Thursdays at 5pm on the Civic Centre lawns (until Shinju, which starts on friday september 4). Sammy will be appearing in the Float Parade and opening and closing cermonies.
Without enough Legs, Sammy has to stay locked in the civic centre storeroom :-(
Your Legs are needed - more Legs are needed!!!!! 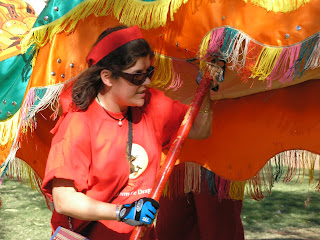 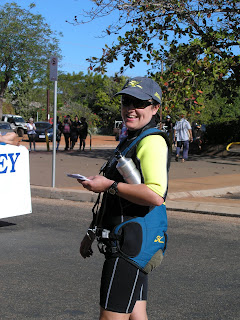 Photos: Commando ready to roll, above ... Meanwhile Barge Arse wasn't a Sammy Leg. Instead on such a hot day she dressed up in a tight rubber outfit and paraded behind some other club's float. (s&m float?)
Posted by AlphaBet (millsy) at 3:19 PM No comments:

(transcript of communications intercepted over the last few days...)

Just in case you didn't get Cock Ups email, like me and Muppet, Monday's run (24th August) is from AT's and Westpacs somewhere on a corner of Swift and Goshawk somewhere in Roebuck, we think.


Hey Westpac & AT
Didn't you want anybody to know where the run is-double down downs!!
Barge


hi barge,
yeap we are still good for the run, just havent made our mind up where to start. probably at our house , but i will talk to mark and confirm with you is that ok?
---
Posted by Red at 8:59 AM No comments: 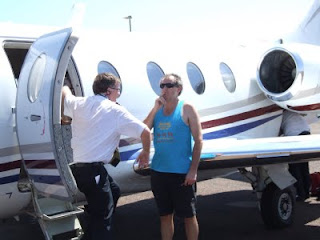 Well, unfortunately I was unable to make the run last Monday night so I can’t write about it so instead I thought I’d dedicate this week’s Trash to my excuse for not turning up. It was my cousins 50th birthday and he was having a party at his Villa in . He sent his private jet over to pick me up so I found it a bit hard to say no. You would be happy to know I took my runners and Broome Hash shirt with me and participated in part of the Hash run on the Monday night. The drinking part! In fact I participated really, really hard and am still paying for it. I‘m sure you would have all been proud. You can see in the photo how I was having trouble deciding which beer I wanted as I boarded, Maybe I should have taken Shrink along with me.

Actually apparently has a popular Hash group. Unfortunately my timing was wrong but if anyone is heading over that way keep it in mind and check out their website. Running around over there would be great. If you can go by private jet it is always much nicer. You get red carpet when you arrive in and you skirt around all that immigration and customs crap. It’s only a two hour trip so you don’t get much drinking time. I finally made a decision and went with a Crownie.

I realise this will earn me a down down but I should be able to drink again by Monday. 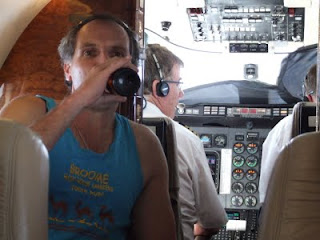 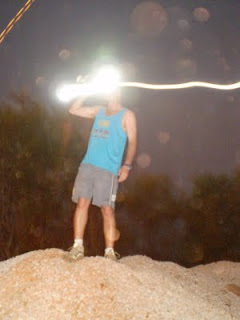 Well last Mondays run will have to go down as the best hash run ever. Not just because I helped Quickie set it but because I write all this crap and I can put whatever I like. Jokes aside it was a good run and a great turnout even though we were missing a few of the regulars like Kama, Cockup, Read, Booberator and Director. Over 20 people running backwards and forwards through the bush around Roebuck Estate, Blue Haze and the Rodeo grounds. It was a 5 km walk or about an 8 km run for all those suckers who took all the long onbacks. Well done Conchie. Unfortunately Mr A.Tool the hornblower was taken out by a sidewinder cruise missile while calling on the pack.
Back at Quickies we had the circle led by Slow Lane who christened a couple of Virgins and charged Half-arsed and Barge for being wankers in bright red shorts. The enforcers had an easy night as most people were able to put away their down downs as we were all pretty hot, sweaty and thirsty. We had home made sausage rolls and a nice healthy salad with pine nuts! A couple of slackers, namely Shrink and Muppet, just turned up at the end for the food and drink.
As the hares, Quickie and I had a great time setting the trail. It is fun trying to work out how to catch out the older and/or faster hashers and make the bastards run harder.
If you haven’t set a trail yet then have a go, just ask on Mondays after the run and get someone to help you set it if you prefer. The food can be a flash or as simple as you like to make it and is paid for Westpac.
Next week at Barge’s there’s a spa. Does that mean it’s going to be a hard run? OnOn 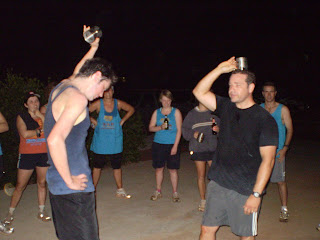 Posted by faucet at 6:30 AM No comments:

BRING BATHERS-Will Heat up the Spa!

Hares: Quickie and Faucet
Posted by Broome mob at 10:00 PM No comments: 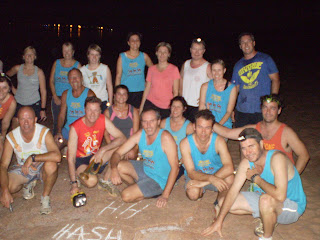 Well and his bitch Slow Lane sure know how to draw a crowd. Twenty eight was a pretty big turnout. It was definitely a great tour of the foreshore including the . Up a dune, through the scrub, a few false trails around the poo ponds, into the light industrial area, back through Demco. Then a second Caravan park tour through the PCYC where we had to avoid people throwing punches and then a bloody long on home. We had Visitors and Virgins and even a few birthdays. Muppet would have forgotten to mention hers if a friend hadn’t dobbed her in. A couple of others then got brave and suddenly remembered they were having birthdays too.Why be shy, you get a free beer and people sing to you.
We had a naming with Quickie christened on her knees by Kama and adding the holy water. 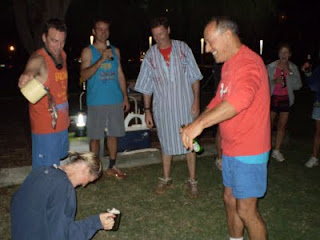